After Shahid Kapoor in Jersey, Sidharth Malhotra to play lead in Dil Raju’s next?

After Marjaavan, Sidharth Malhotra will be next seen in Dil Raju's next project 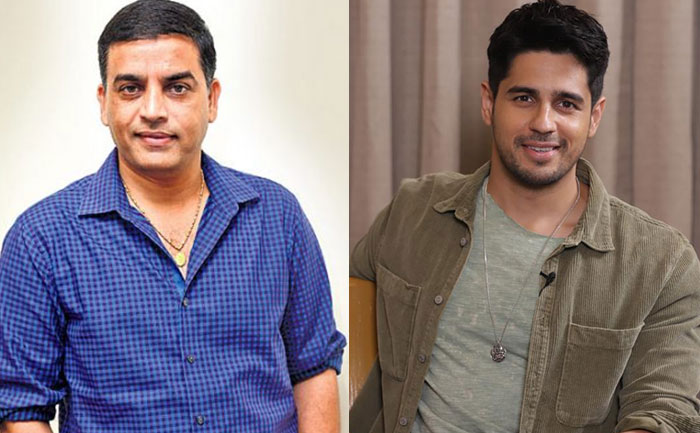 Dil Raju is a renowned Indian film producer, who is popularly known for his contribution in Telugu Cinema. With a Jersey remake, Dil Raju is all set to make his debut in Hindi film industry and the shooting of the film has already gone on floors. Dil Raju’s Bollywood debut stars Shahid Kapoor and Mrunal Thakur in the lead roles.

If anything to go by the latest buzz, Dil Raju, who is the owner of Sri Venkateswara Creation, will be collaborating with Bollywood actor Sidharth Malhotra for his next. If the rumors come true, Sidharth Malhotra will be next seen in a Hindi remake of a Telugu movie.

According to the latest buzz, Sidharth Malhotra has already been roped in for Dil Raju’s next. In addition, makers are currently busy acquiring the rights of remake of the Telugu film.

The upcoming yet-untitled film will be scripted by Milap Milan Zaveri and co-produced by Bhushan Kumar and Nikhil Advani. Once the formalities are done, makers will officially announce the cast and when the film will go floors.

A source was quoted as saying by Mumbai Mirror, “Recently, Bhushan approached Siddharth with a new action film which is being scripted by Milap. Sid has shown interest in the subject and the makers are working towards developing the script further.”

Sidharth has recently wrapped up the shooting of the biopic of Vikram Batra – Shershaah, directed by Vishnu Vardhan and produced by Karan Johar.

Prior to this, Dil Raju had produced multiple hit movies including Sathamanam Bhavati, Fidaa, and F2 – Fun and Frustration and currently waiting for the release of Mahesh Babu starrer Sarileru Neekevvaru.

Sarileru Neekevvaru is scheduled to hit the theaters on January 11, 2020.