The video of Jeff Bezos delivering Don's dialogue was first shared by Bollywood actor, Riteish Deshmukh on his Twitter account. 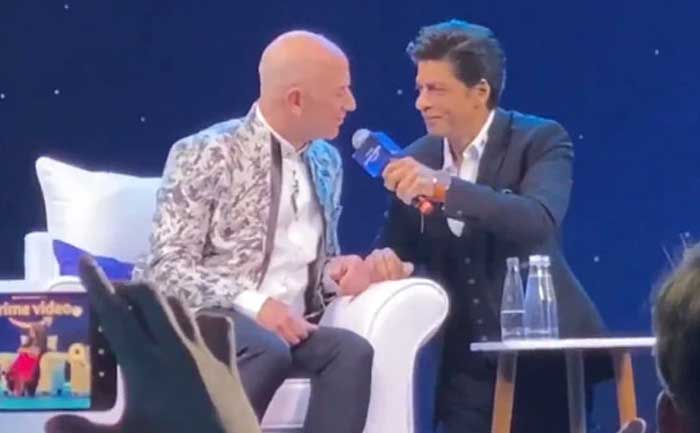 Shah Rukh Khan has once again proved that there is nothing impossible for him to do. Yes, Shah Rukh attended an event hosted by Amazon on Thursday (16 January, 2020), where he made World’s richest man and Founder of Amazon, Jeff Bezos say his popular dialogue from his 2006 film Don.

There is no point of guessing, the dialouge Shah Rukh made Jeff Bezos say was “Don ko pakadna mushkil hi nahi namumkin hai.”

However, looking at the difficulty while pronouncing the Urdu world (Na Mumkin), Shah Khan gave it an international touch and modified the same dialogue to it, “Don ko pakadna mushkil hi nahi impossible hai.”

The video of Jeff Bezos delivering Don’s dialogue was first shared by Bollywood actor, Riteish Deshmukh on his Twitter account. The video instantly went viral and has now been shared by multiple fan clud dedicated to the Zero actor.

Take a look at the viral video here:

Sharing the picture with CEO of Amazon and Zoya Akhtar from the event, Shah Rukh Khan wrote on Twitter,  “Fun and learning evening with the zordaar Zoya Akhtar and the zabardast Jeff Bezos. Thanks everyone at Prime Video India for arranging this,” read an excerpt from SRK’s tweet.

Fun and learning evening with the Zordaar #Zoyaakhtar & the Zabardast @jeffbezos Thanx everyone at @PrimeVideoIN for arranging this. Aparna, Gaurav & Vijay Thx for ur kindness. @AmitAgarwal ur bow tie was a killer… pic.twitter.com/RQUi0854PZ

On the professional front of Shah Rukh, he was last seen in Anand L Rai’s Zero released in December 2018, co-starring Anushka Sharma and Katrina Kaif. SRK has not yet made any official announcement of his upcoming project. If anything to go by rumors, Shah Rukh Khan has been roped in for the Hindi remake of Quentin Tarantino’s Kill Bill.