Shehnaaz Gill falls in the snow while shooting in Kashmir; Watch

Shehnaaz Gill posted a video on her Instagram handle of herself dancing in the snow while she falls. 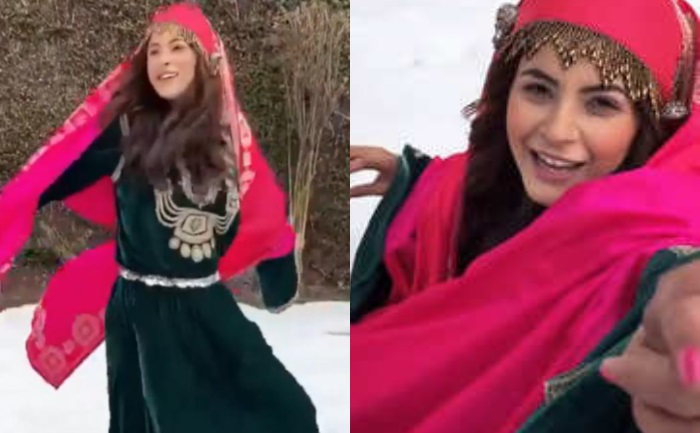 ‘Bigg Boss 13’ fame Shehnaaz Gill has been trending on social media for her breathtaking pictures from Kashmir. Recently, the singer-actress was filming for a music video along with the rapper Badshah. This will be the first time the duo will be collaborating. Now, the gorgeous lady has shared a hilarious video that is leaving her fans in splits.

In the video, Shehnaaz looks drop-dead gorgeous and was seen donning a full Kashmiri attire and turning into a ‘Kashmir Ki Kali. She is seen twirling on the snow, however, her feet gets stuck and she falls on the snow and a team member helps her to get up. The actress was seen laughing, to make it funny, she added a hilarious tune of the popular video game Mario in her video.

She was also seen dancing on Mission Kashmir’s popular song Bumbro and that video was loved by her fans and followers. The video also shows beautiful views of the Kashmir valley and, it is definitely a treat to our eyes. Sharing the video, she captioned it as: “When in Kashmir do it Their way! Had to dance on this epic song at the heaven on earth…#Kashmir.”

Talking about her collaboration with the rapper, the details of the song are still under wraps. Reportedly, the song will be of a typical Badshah song and Shehnaaz will be making an appearance. It is expected to be released by month-end.