Shilpa Shetty and Raj Kundra got embroiled in a controversy after he was alleged of producing pornographic content for an app. The actress now posts about 'a mistake' on her Instagram handle Bollywood couple, Shilpa Shetty and Raj Kundra got embroiled in a controversy after he was alleged of producing the pornographic content. The filmmaker has been alleged of making money out of adult content, which is posted on a foreign based mobile applications. Mumbai’s crime branch officials had arrested Kundra from his Mumbai residence and the actress was also reportedly grilled in the probe. In August he received the interim bail from Bombay High Court. Amidst the case being in headlines, the actress posts about ‘a mistake’ on her social media handles.

On Thursday (August 26) late night, Shilpa Shetty took to the stories section of her Instagram handle to share a deep cryptic message. She shared a page pic from Sophia Loren’s book, wherein the subject is about the Mistake. It reads, “We can’t make our lives interesting without making a few mistakes here and there. We hope that they won’t be dangerous mistakes or mistakes that hurt other people. But there will be mistakes. We can see our mistakes as things we’d like to forget or as our most interesting, challenging and stimulating experiences. Not because of the mistakes themselves but because of what we learned from them. I’m going to make mistakes, I will forgive myself and learn from them.” 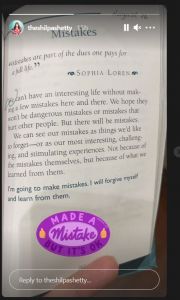 Shilpa Shetty maintained a distance from the limelight after her husband was arrested. She is one of the judges on dance reality show, Super Dancer 4. After the controversy she took a break and the makers had to replace her with guests judges such as Karisma Kapoor and others. Just a few days ago she resumed shooting for the show.

Also Read:  Shilpa Shetty Kundra To Portray Mahesh Babu’s Aunt In His Next?