Twitterati slammed Bollywood actress Sonam Kapoor for speaking up on Kashmir situation and expressing displeasure over Hindi films getting banned in Pakistan. 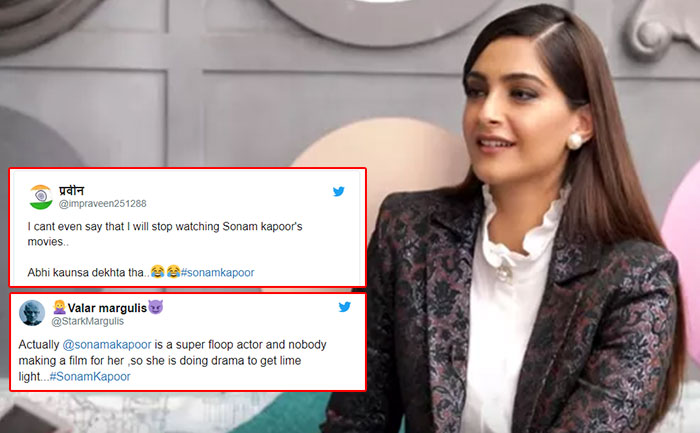 Days after Narendra Modi led-Bharatiya Janata Party (BJP) government revoked Article 370 and 35(A) from Kashmir, Bollywood actress Sonam Kapoor has expressed her views on the same. It is to be noted that there are several Hindi film actors including Kangana Ranaut, Zaira Wasim, Dia Mirza, Pooja Bedi, Raveena Tandon and others have supported government’s move of scrapping the controversial Articles 370 and 35(A), granting special privileges to the people of Jammu and Kashmir.

In a recent interview with BBC Asian Network, the daughter of Anil Kapoor has spoken about Kashmir situation and India’s relationship with the neighbouring country, Pakistan. The Veere Di Wedding actress has vividly said that she does not know much about Kashmir becuase of “contrasting and contrary news everywhere” but claimed that she has not been to Kashmir because of the unrest in the region. Kashmir Crisis: What Is Article 370? How Does It Facilitate The People Of Kashmir?

In the same interview, Sonam Kapoor revealed her links with Pakistan. Sonam said that she is half Sindhi and half Peshawari. She claimed, “It’s heartbreaking to see part of my culture is something that I can’t explore as well because of that (referring to relations between India and Pakistan).”

Sonam kapoor actually says that she has no idea about the Kashmir conflict and article 370 .. @BBCHindi is so dumb to ask Bollywoodiyas with 0 GK ? pic.twitter.com/nUrDSqcbWp

Talking about the Kashmir situation, Sonam said, (via) “It’s heartbreaking to see where the situation has landed right now and I’m very patriotic. So I think for me now it’s better to keep quiet and let this pass because even this too shall pass.”

Twitterati seems to be upset over Sonam Kapoor’s reaction on Kashmir and showing sympathy over the neighbouring country. The beautiful actress is quite vocal on social media but this time her views did not go down with netizens and they slammed and trolled her for sharing her views on Kashmir situation.

Right now #SonamKapoor is protesting against government decision but after some years u will see that she is making her house in Kashmir. pic.twitter.com/ethwHg9wUl

I cant even say that I will stop watching Sonam kapoor’s movies..

#SonamKapoor – My family has strong links in Pakistan!

Why is she being trolled for saying this?

We should stop paying heed to out of job actress like #SonamKapoor , its a trend now days, if you are out of work, start taking anti India & Pro Pakistan stand. Even here parents dont take this dumbo seriously, i bet she cant even sing Indian National anthem without reading.

#SonamKapoor is new Rakhi Sawant of Bollywood, No work, No acting, Find way to be in media.#SonamKapoor

On the professional front, Sonam Kapoor was last seen in ‘Ek Ladki Ko Dekha Toh Aisa Laga’ with her dad Anil Kapoor, Juhi Chawla, Rajkummar Rao, and Regina Cassandra. She will next be seen romancing Dulquer Salmaan in ‘The Zoya Factor’. The Abhishek Sharma directorial is an adaptation of Anuja Chauhan’s 2008 novel The Zoya Factor. The film is about a girl, Zoya Solanki, who becomes a lucky charm for the Indian Cricket team during the 2010 Cricket World Cup. The Zoya Factor, produced by Pooja Shetty Deora, releases on September 20, 2019.