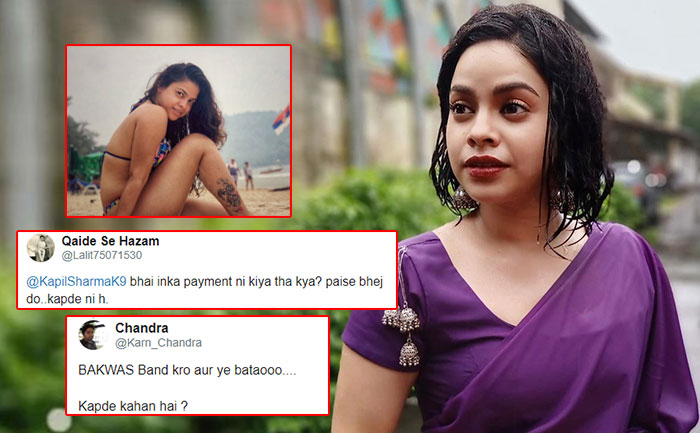 Sumona Chakravarti — who made her acting debut at the age of 11 with Aamir Khan and Manisha Koirala’s  Mann in 1999 — has taken the internet by storm with her sizzling bikini picture. After making her debut, Sumona Chakravarti has appeared in several TV shows including The Kapil Sharma Show.

In Kapil Sharma’s show, Chakravarti played the role of Sarla Gulati, who is in love with her neighbour Kapil Sharma. The popular TV actress, who is currently enjoying in Thailand, posted a picture of her sitting on a beach. After seeing her stunning sultry picture, there are fans who want to get some more pictures of Chakravarti.

However, the same bikini picture of Sumona Chakravarti did no go down well with scores of netizens and they trolled her and posted some abusive or lewd comments on Twitter.

Posting her beautiful picture on Twitter, Chakravarti wrote a caption which reads, ‘Hello Sunday.’ In the picture, Sumona Chakravarti can be seen flaunting her leg’s tattoo. Notably, getting trolled on social media is not a new thing for celebrities.

Poverty of Bollywood. No clothes to wear for a poor soul. This picture proves that smaller and lesser the clothes one wears it gets attention of casting couch candidates from Bollywood

Talking about the actress, Chakravarti rose to fame with ‘Comedy Nights with Kapil’ where she played Kapil Sharma’s on-screen wife Manju. After wrapping her Comed Nights With Kapil, she also appeared in ‘The Kapil Sharma Show’ where she played Sarla Gulati, Dr. Mashoor Gulati’s (Sunil Grover) daughter.

Also Read: The Kapil Sharma Show: Ekta Kapoor And Mallika Sherawat Had A Blast With Kapil