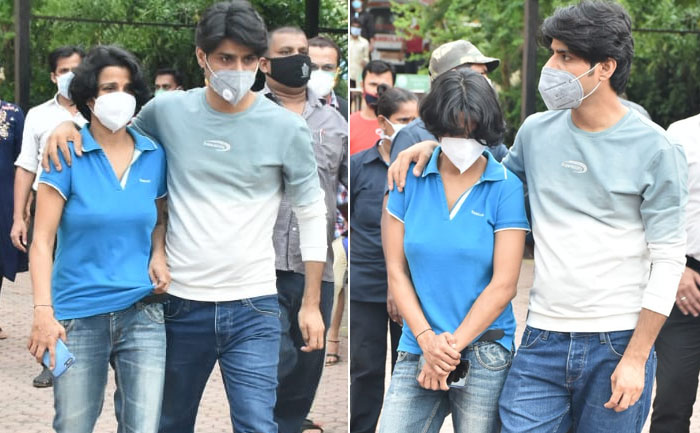 Sushant Singh Rajput’s death has left his fans and the entire film industry in shock. Earlier, today, the actor committed suicide at his Bandra residence in Mumbai, aged 34, and was declared dead by the Mumbai Police earlier today. The police also reported that no suicide note was recovered.

Several Bollywood television actors as well as politicians mourned the loss of the actor. Sushant’s mortal remains were taken for a post-mortem in Cooper hospital in Juhu, Mumbai. The actor was reportedly undergoing treatment for depression.

The later actor’s sister Nitu Singh was seen rushing at the hospital, she was seen accompanied by filmmaker Sandeep Singh. In the photos, Sushant’s sister was seen in a devastated manner over her brother’s unfortunate demise.

A post shared by Bollywood Star Kids (@bollywoodstarkidsofficial) on Jun 14, 2020 at 6:47am PDT

A report in India Today stated that Sushant’s father will be travelling to Mumbai from Patna tomorrow and his funeral will take place in Mumbai tomorrow.

Sushant Singh Rajput’S journey from television serial to Bollywood movie was remarkable, he made his film debut in Abhishek Kapoor’s 2013 release, ‘Kai Po Che’, and was later seen in films like movies ‘Detective Byomkesh Bakshi”, ‘Kedarnath’ and ‘Shudh Desi Romance.’ He went on to star in ‘MS Dhoni’ and ‘Chhichore’ which were an extensive hit at the box office.

We offer our sincere condolences to Sushant Singh’s family and friends.