Taapsee Pannu, Swara Bhasker react to Rhea Chakraborty being mobbed at NCB office by the media in SSR case 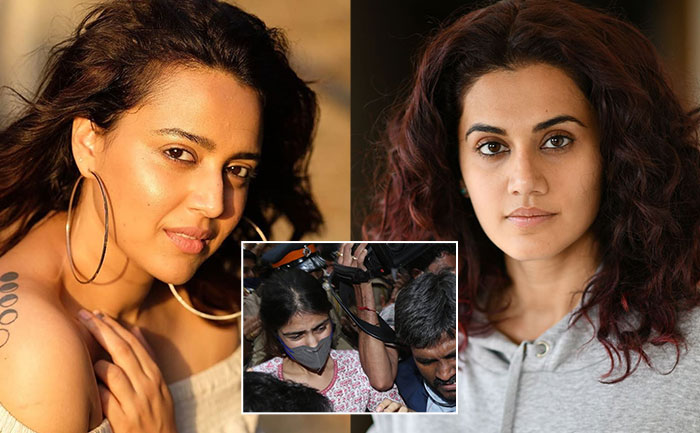 In the ongoing investigation regarding demise of actor Sushant Singh Rajput. The NCB after arresting Showik Chakraborty summoned Rhea Chakraborty. The actress appeared before the NCB for questioning in the drugs case linked to the actor’s death. But as she tried making her way into the Narcotics Control Bureau (NCB) office. She was mobbed by the media, despite being escorted by police personnel.

Visuals shared on social media showed the 28-year-old actor being pushed by journalists as she made her way to the NCB office, escorted by Mumbai Police. The media’s behaviour was criticized by Twitter users, including celebrities who called it “disgusting”.

Here is what Bollywood celebs tweeted:

Taapsee Pannu wrote, “In the name of Justice these people have lynched a human being off her right to live even before proven guilty.”

In the name of Justice these people have lynched a human being off her right to live even before proven guilty. I sincerely pray Karma finds the address of each n every human being part of this lowest low of mankind we are witness to. https://t.co/Qkkhnfup53

The law must and will take it’s course. This behaviour reprehensible in every way. Enough! Why can’t Rhea be given space and the right to physical distancing? Why are the media behaving like vultures? Please please give her space 🙏🏻 Stop attacking/dehumanising her & her family. https://t.co/FNb6fNy36o

What is wrong with us ?? We cannot behave like this. Sure the truth must come out but this girl deserves her space as a woman , basic respect and her right to social distancing norms https://t.co/Gu38XKGcl6

“Media vultures. The press is behaving barbaric. Is there no one in authority that can stop this,” Shibani Dandekar expressed her concern on Instagram Story.

Rhea Chakraborty is being questioned by NCB over a drug angle in the death of her boyfriend, actor Sushant Singh Rajput.

Also Read: Rhea Chakraborty Arrives For NCB Interrogation; Lawyer Says That She Is Ready For The Arrest