The Rock and Kevin Hart Attend Jumanji: The Next Level Screening, Announce Free Movie Tickets for a Year

Apparently, The Rock and Kevin Hart surprised some of the theaters full of fans 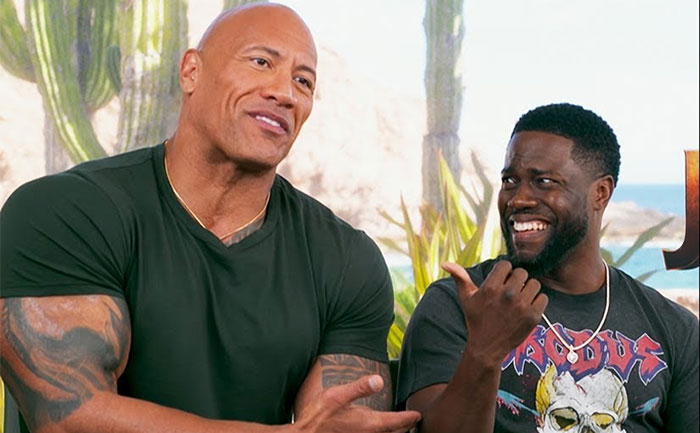 The Hollywood film Jumanji: The Next Level is pretty much doing well in the theatrical run. Also it is the press tour for the sequel that is primarily wrapped up and it is something that you would think of as a major blockbuster film in the current time being.

Sometime ago, this week the popular stars Dwayne Johnson and Kevin Hart readied themselves for Christmas in some interesting, fun costumes. However, now we are sure why they had put up on these enthusiastic duds. Apparently, they wanted to surprise some theaters with full of the fans.

In fact, they even intended to surprise all the movie goers eager to see, “The Next Level,”. So what they did is spread some jolly Christmas cheer in a form of movie snacks and well some, Sony PlayStation 4s. Not only all that, but also free movie tickets for a year.

In the video actor Kevin Hart said, “This is why we made this movie. We made this movie to get exactly this. To bring everybody out to the theater and bring them closer together.” Have a look at the video of the giveaway below:

Thank you @Cinemark for being such giving parters during the holiday season and bringing this level of JOY to these people. FREE MOVIES FOR A YEAR for every single person in the audience. ♥️🥃#JUMANJI https://t.co/Nc5W4jtj66

Moreover, Dwayne Johnson said in the video it was pretty much indeed great to see all the guys there. He further stated that Kevin and he has been promoting the film Jumanji around the world for about the past couple of months then.

What’s more is that, Jumanji: The Next Level lately witnessed the return of actors like Karen Gillan, Jack Black, Nick Jonas, Rhys Darby, and the first film’s cast of teens which are Ser’Darius Blain, Madison Iseman, Morgan Turner and Alex Wolff.