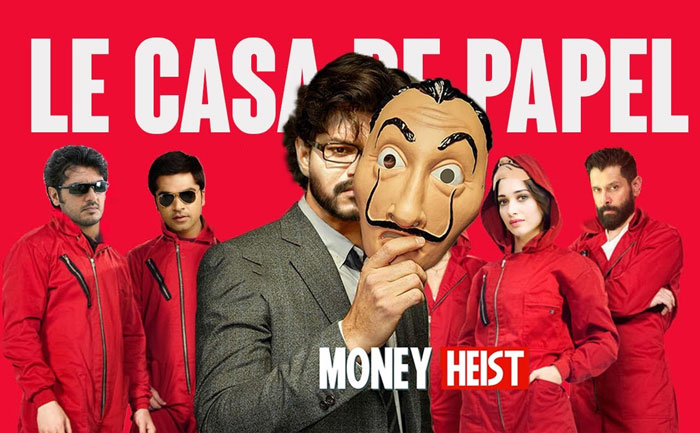 Money Heist on Netflix is one of the hot favourite Spanish heist crime drama television series.   Fans all over the globe are reimagining their favourite actors as Money Heist characters. One such die-hard Indian fan of the series has gone a step further. He has made a trailer where he has replaced the original actors with his favourite stars.

Arun Suresh Kumar a fan of the series has come out with a trailer of Tamil version of Money Heist. He has shared it on ASK Studios YouTube channel.

It has Tamannaah as Tokyo the narrator, Ajith as ruthless Berlin, Vikram steps in the shoes of Moscow, and Simbu plays Denver.  Arya features as Rio, Arvind Swamy as Helsinki, Samantha Akkineni as Nairobi. We have  Vijay Sethupathi as Oslo and Lady Superstar Nayanthara as Raquel. Thalapathy Vijay is seen as the famed Professor.

A couple of weeks back Money Heist director Alex Rodrigo was shown pictures of Indian celebrities during an interview. He was asked who will fit the bill in the India version of his show. Alex had then picked Vijay as Professor, creating fan frenzy.

This fan-made trailer is truly worth an applaud. We wonder what will director Alex Rodrigo’s reaction be if he watches this?