Mount Kailash one of the sacred Mountains that has a number of religious beliefs attached to it. At an elevation of 6.656 meters it is the highest peak of Kailash Range which spreads in Tibet and India.  The sacred mountain lies around the origin of the longest river of Asia the Indus River, Sutlej, Brahmaputra, and Karnali River. It is a religious place among 4 religions Bon, Buddhism, Hinduism, and Jainism. Each religion has different believes about mount Kailash. Hindus believe Lord Shiva resides on it with Shakti. The Jains believe it to be the place where Rishaba, the first of the twenty-four Tirthankaras attained liberation. Followers of Bon, Tibet’s pre-Buddhist, shamanistic religion, call the mountain Tise and believe it to be the seat of the Sky Goddess Sipaimen. Tibetan Buddhists call the mountain Kang Rimpoche, regard it as the dwelling place of Demchog and his consort, Dorje Phagmo.

Mount Kailash is the most mysterious and sacred mountain in the world. Strangely it is shaped like a pyramid and is also known as the “Biggest Man-made Pyramid”. There are many such mysterious activities which have been noticed at this peak.

Here are some of the mysteries surrounding Mt Kailash that will leave you in awe: Mount Kailash’s height is 6,656 meters above sea level. It is much lesser than Mt Everest. But though many have conquered Everest. No one has ever been able to climb the Mount Kailash summit. The reason according to a scientific hypothesis is that the mountain keep changes its position. All the treks to the summits have been unsuccessful till date. Therefore though many have tried none have reached the peak. Legend claims that only a Buddhist monk Milarepa has been able to do so.

2. The mysterious shapes of the lakes There are two lakes at the foot of Mount Kailash. Lake Manasarovar represents God’s is one of the highest freshwater lakes in the world. It is shaped like a full moon. The lower lake Rakhast Tal represent Rakshas is one of the highest salt-water lakes and has the shape of the crescent moon. The two lakes represent solar and lunar forces, good and negative energies respectively. Mount Kailash stands as a balance between the two. According to a Russian theory, Mount Kailash could be the biggest ancient Man-Made pyramid, the center of an entire complex of the smaller pyramid (100 in total), and is linked with Pyramid of Giza and Teotihuacan. Mount Kailash could be the center of the world that connecting other monuments or sites from where the paranormal activates have been observed. 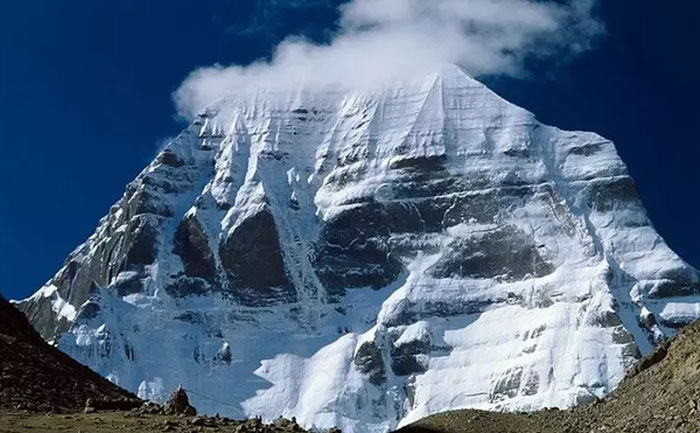 Another mystery of Mount Kailash is the rapid aging of those who are near it. The growth of nail and hair that occurs in 12 hours spent near Kailash is equal to two weeks in normal conditions. Some scientists believe that the Kailash range is a vortex of energy that lifts the body and mind.

5. Mythical Link Between Heaven And Earth The four faces of Mount Kailash face the four directions of the compass. According to the Vedas, the mountain is a link between heaven and earth. The followers of Hinduism, Buddhism and Jainism believe that the peak is the gateway to heaven. The Pandavas along with Draupadi are believed to have attained moksha whilst trekking up the peak, with one of them falling off before reaching the summit.

6 The mystery of Swastik and Om: When viewed from the south face, a swastika can be seen. It happens as the sun is setting, the mountain is said to cast a shadow that looks like a Swastika.  Also when snow falls on the peak it takes the shape of an OM. Mount Kailash distinctly has four faces i.e. the North, West, South, and East. According to the Puranas, Mount Kailash is situated in the centre of the Earth and s responsible for dividing the same into four regions on the basis of some quarters.

Also Read:  Rath Yatra 2019: Not only Puri but these temples too celebrate Lord Jagannath’s Festival