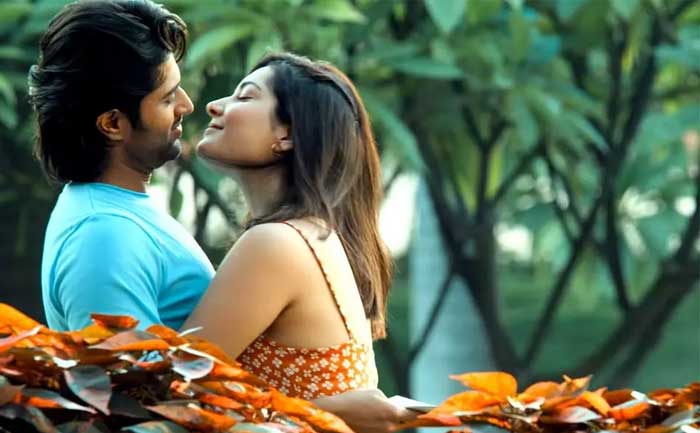 Telugu Superstar Vijay Deverakonda — who was last seen in Dear Comrade — is currently gearing up for his upcoming movie World Famous Lover. Vijay Deverakonda is one Telugu star who does not shy kissing his co-star on the silver screen. The Geetha Govindam actor is also known as Emraan Hashmi of Telugu film industry for the same.

We have seen Vijay Deverakonda doing some kissing scenes in his last couple of movies including Arjun Reddy, Geetha Govindam and Dear Comrade. Now, we have got to see yet another kissing scene of Vijay Deverakonda and Raashi Khanna from their upcoming movie, World Famous Lover, which is scheduled to hit the theaters on February 14, 2020.

Days before the teaser of the film unveiled, Rashmi Khanna gave hints about her kissing lip-lock scene with Vijay. During an interview, when interviewer asked her who would she like to do a lip lock scene if she was Vijay Deverakonda and her instant response was “may be next actress.”

Sharing her experience of dubbing for the first time in Telugu language for World Famous Lover. Raashi said, “I am so glad that Kranthi Madhav chose me for this role in his directorial venture. When I read the script, I had tears in my eyes, and that happens quite rarely. I try to detach myself from the characters I have to play but certain characters get into your skin. You relate to some roles on a personal level. I guess it was quite evident on my face because my brother once asked me if I was alright.”