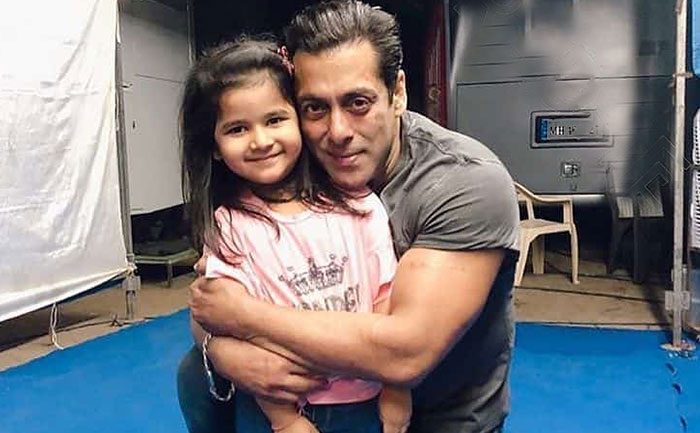 Superstar Salman Khan is known to share a great bond with kids. The Bharat star is at his happiest when he is surrounded by children. His bond with his nephew is known to all, pictures and video of the Mama Bhanja instantly create a buzz on social media. Now a video of the superstar hugging a cute little girl is viral on the internet.

Salman Khan is busy shooting for his next film Radhe: Your Most Wanted Bhai. A viral video from the sets has emerged online where he is seen spending time with a little girl. The adorable child is Yashika Wadke.

In the video, the little girl, in a pink top and a pair of denim jeans looks smilingly at Salman, who gives a kiss first and wraps his arms around her affectionately. The video got a lot of love from fans.
.

On the work front, Salman Khan has his plate full with a number of projects. He has Radhe being directed by Prabhudheva. This will be his third outing with South Indian director after Wanted and Dabangg 3. Radhe also stars Disha Patani, Randeep Hooda and Jackie Shroff in pivotal roles and will hit the screens on Eid.

Next is Kabhi Eid Kabhi Diwali. The film will be written and produced by filmmaker Sajid Nadiadwala and helmed Farhad Samjhi. He also has Kick 2 and a movie with his brother in law Aayush Sharma. Rumours abound that the actor might star in Rakesh Sharma biopic. But there has been no confirmation of the same.

Also Read: Kaithi Remake: Not Salman Khan but this superstar to reprise the role