Anushka Sharma and Virat Kohli never fail at shelling out major couple goals to their fans. He was recently seen carrying a bracelet similar to that one of his wife 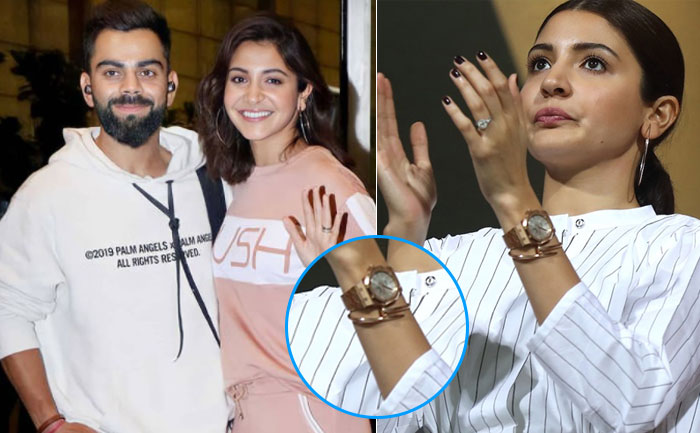 Star couple, Anushka Sharma and Virat Kohli are known to shell out major couple goals for their fans. Time and again the duo ruled the internet trends with their adorable antics. This time around, he is making headlines over his bracelet. Well, what’s so special about this bracelet? The cricketer was spotted wearing it which is similar to that one of Anushka’s. Fans wonder if they owe a pair of couple bracelets. And few speculate that Virat must have carried Anushka’s bracelet.

Anushka is quite regular at cheering hubby, Virat, whenever he has a special match. A while ago, the actress was seen making gestures on the field. That’s when she flaunted her watch and a metallic bracelet. Recently, one of the fan clubs posted a picture of Virat, wherein he is seen having a gala time with his friends. The picture highlights the bracelet. The bracelet on Virat’s wrist is exactly similar to that of Anushka’s from a throwback pic.

What do you think? Its the same bracelet or they have a pair of couple bracelets?

Both Virat and Anushka are currently in Mumbai for the upcoming IPL match. Few days they were spotted at the airport and their newly born daughter Vamika was also with them.