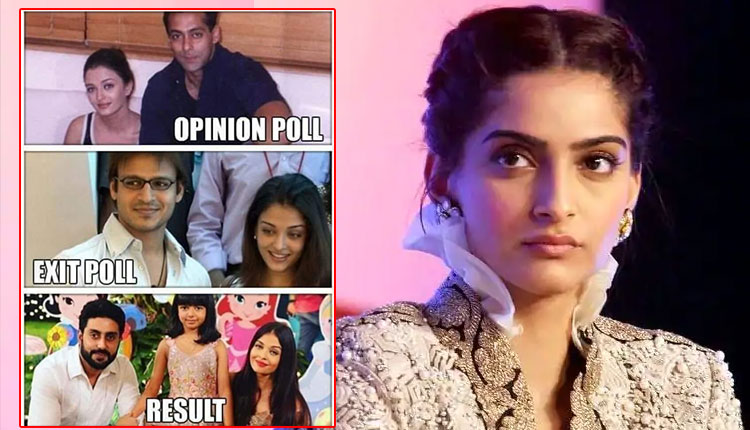 The nation is waiting with bated breath to see who will be the next Prime Minister of the country as the exit polls of Lok Sabha Elections 2019 are currently on. During this tense phase actor Vivek Oberoi has shared a meme that has not gone down well with the netizens. Vivek took to Twitter and shared a collage that features him, Aishwarya Rai Bachchan, Abhishek Bachchan, Salman Khan and Aishwarya’s seven-year-old daughter Aaradhya.

Vivek has himself reposted a meme which states Salman and Aishwarya’s relationship as the ‘opinion poll’, Vivek and Aishwarya’s affair as the ‘exit poll’ and Abhishek-Aishwarya and Aaradhya’s happy family as the ‘final result’.

He was soon slammed by Sonam Kapoor, who called Vivek’s post “disgusting” and “classless.”

Not only Sonam but many others took the actor to the task. Check out the tweets here:

Some People never grow up in life …This guy never knew how to respect a woman, and don’t think he will ever learn to… Once a loser , always a loser @vivekoberoi #VivekOberoi pic.twitter.com/n6QVQsZgDU

This is in such poor taste.. ones personal life is not to be discussed here.. remember there are 4 individuals who are father/ mother/ brother /sister .. and everyone has moved on .. shame

Kyun Apne upar koi sankat ghasit rahaa hai .. I am wishing that Aishwarya will ignore it else you will be struggling from post to Piller

Salman and Aishwarya’s affair in 2000 made headlines. However, they called it quits by 2002. Post which, Aishwarya dated Vivek Oberoi, but after his famous sparring with Salman Khan, the lady cut all ties with Vivek. She married Abhishek Bachchan in 2007, and the two have a daughter Aaradhya.

On the work front, Vivek’s political biopic PM Narendra Modi will release on this Friday, May 24.