On Thursday (September 16), Virat Kohli announced stepping down from his captaincy position. Take a look at special moments when his wife, Anushka Sharma cheered during the tenure of his captainship Star couple, Virat Kohli and Anushka Sharma never fail shelling out major couple goals to their fans. The couple is known for ruling the social media trends with their announcements and pictures. On Thursday (September 16), Kohli broke million hearts announcing that he is stepping down from his position of India’s T20I captain post the ICC T20 World Cup. The match is scheduled to take place in UAE and Oman October 17 to November 14. Emotional Virat Kohli fans took to social media platforms to wish good luck for his career plans. Netizens also shared a few beautiful moments from when Anushka cheered him up on field during the tenure of him a captainship.

During the IPL matches in 2018, Anushka Sharma marked her presence at the pavilion to cheer Virat. She never failed cheering him before any of the matches. Her expressions were quite evident that she was truly impressed by Virat’s on field performances. 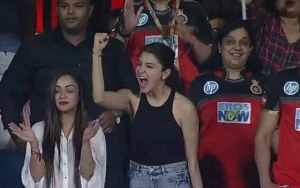 One of the special moments from cricket matches are Virat Kohli flaunting special gestures for his lady love. During the T20 match with the West Indies, Virat impressed the audience with his 67-run victory alongside securing a 2-1 series win against them. He gave a flying kiss to his wife and dedicated the big win to Anushka when they rang in the celebrations of their second wedding anniversary. 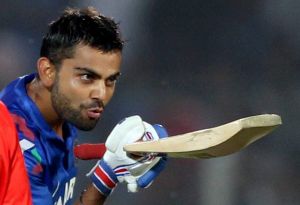 Anushka Sharma is one of the leading actress in Bollywood and she is known for having a busy schedule. Although she never fails accompanying him during his matches, there were a few wherein she couldn’t grace the pavilion. The actress made sure to cheer him up with her social media posts. In February 2018, Virat Kohli had won the man of the Match award after his 6th and final ODI against South Africa in Centurion. He credited this epic win to his lady love. Mesmerized, Anushka Sharma took to her Instagram stories to share his picture as a warm gesture of cheering him. 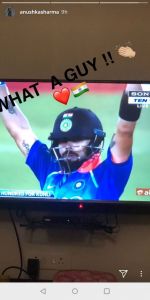 In 2019, Anushka Sharma had joined hubby, Virat on the field for a post-match celebration. She appeared absolutely happy and cheerful while walking with him on the cricket ground. Under his captaincy, Indian cricket team had defeated Australia alongside winning the Border-Gavaskar Trophy. 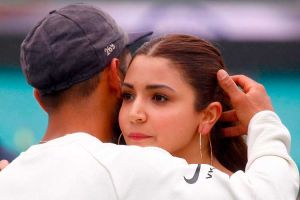 During IPL 2020 matches, Anushka Sharma treated hubby Virat with flying kisses. She was pregnant with Vamika and graced the pavilion to cheer him. During the Royal Challengers Bangalore vs Chennai Super Kings IPL 2020 match, Virat scored impressively 90. The proud wifey showered warm gestures for him and gave him few flying kisses.