Find out what Ali Fazal replied to his fan 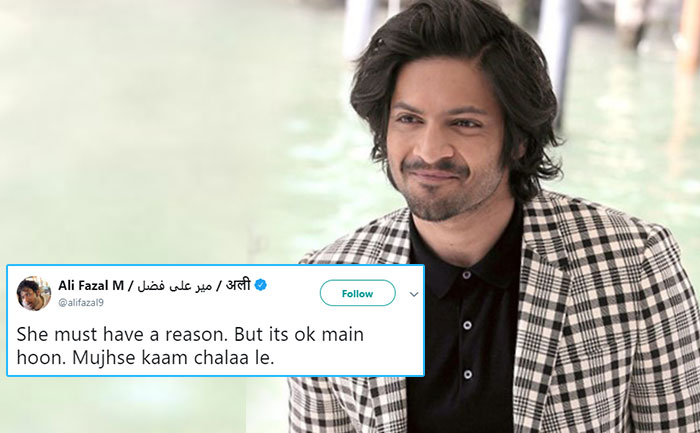 For the unversed, it is no longer a secret that Ali Fazal is dating Richa Chaddha. Now, the duo are open about their relationship and in fact are often active on their social media handles. It was on Wednesday that a fan tweeted to Ali Fazal pleading him to ask Richa Chaddha to unblock him on Twitter. The fan wrote, “Say your gf to unblock me. Can’t see her tweet”

However, Ali Fazal responded to the fan’s tweet with a witty reply. He wrote, “She must have a reason. But its ok main hoon. Mujhse kaam chalaa le.” This tweet he replied to his fan. Later on, his comment box was loaded with comments from his fans. There were many who posted numerous laughing emojis whereas other shared the memes of Mirzapur. Check out the tweet below.

She must have a reason. But its ok main hoon. Mujhse kaam chalaa le. https://t.co/hvqyir320A

On work front, Ali Fazal is being popular in Bollywood and web series in India whereas in Hollywood he appeared in handful of Hollywood films and will be seen next in Death in Nile alongside Gal Gadot. The actor is making his name in both Hollywood and Bollywood. Death on the Nile is all set to release on October 9, 2020.