The COVID-19 cases are increasing with each passing day. India has recently marked 50 lakh Coronavirus cases. In the world rating it has now occupied the second position. However, netizens including Bollywood celebs were seen utilising their quarantine time for self-development activities. Actor Arjun Rampal recently posted his ‘Quarantine Body’ picture and he gets a sweet reply from his girlfriend, Gabriella Demetriades.

Arjun Rampal took to his Instagram handle and shared a picture of himself, he could be seen flaunting his six-pack abs. In the caption of his post, he reveals that the work is in progress. Take a look at the pic right below.

Girlfriend, Gabriella Demetriades took no time to react on the eye-grabbing picture of beau. She commented with the word, “pleasure”. 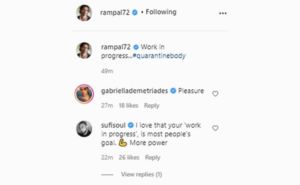 The couple makes sure to treat their fans with major social media PDA’s. The duo has welcomed a son named, Arik last year. And they recently celebrated his first birthday in the month of July. Both of them often keep sharing adorable pictures of their son on social media.

On the work front, Arjun Rampal was last seen sharing the screen space with Sonu Sood, Jackie Shroff, Gurmeet Chaudhary, and others in ‘Paltan’. He also made his digital debut with ZEE5’s ‘The Final Call’. The actor is yet to make the announcement of his next.