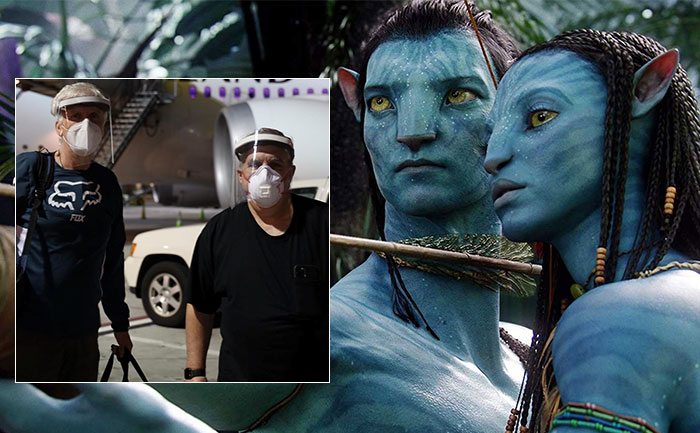 James Cameron has arrived in Wellington to resume filming of ‘Avatar 2’. The director is accompanied by producer Jon Landau and 55 crew members. As COVID-19 lockdown eases worldwide, the international crew of James Cameron’s film has entered New Zealand to shoot the film.

New Zealand has closed the country’s borders since March 16 as a precaution against the spread of COVID-19. Special permission has been granted to the filming crew.

The director arrived on Sunday morning on an Air New Zealand Dreamliner charter plane, direct from Los Angeles, along with producer Jon Landau and more than 50 film workers. The group is currently staying at QT Hotel in Wellington. They will be undergoing a two-week quarantine period before getting back to work on Avatar.

Landau posted about their arrival on Instagram, featuring a photo of the two men in masks. Jon wrote, “Made it to New Zealand. Our 14-day government-supervised self-isolation now begins. #avatarsequels #jamescameron #newzealand #airnewzealand #selfisolation (sic).”

Last month Jon Landau had posted an image of the Avatar set in New Zealand. He had also expressed his excitement at returning to work on the film in Wellington.

“Our #Avatar sets are ready — and we couldn’t be more excited to be headed back to New Zealand next week. Check out the Matador, a high speed forward command vessel (bottom) and the Picador jetboat (top) — can’t wait to share more,” he wrote.

Our #Avatar sets are ready — and we couldn’t be more excited to be headed back to New Zealand next week. Check out the Matador, a high speed forward command vessel (bottom) and the Picador jetboat (top) — can’t wait to share more.

‘Avatar 2’ is the first major Hollywood film to restart production since the coronavirus pandemic shut down film sets worldwide. It is scheduled to release on December 17, 2021.

Sonakshi Sinha Birthday Special: THESE photos of the actress prove that she is a queen of selfies