Avengers Endgame Have Inspired THESE Hialrious Memes So Far 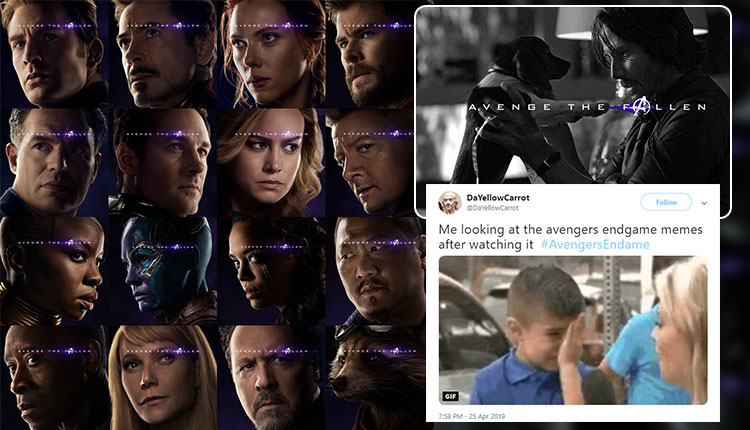 Finally Avengers: Endgame has been released in some regions across the globe including India, today on April 26. The film has opened to positive at the box office window and getting rave reviews from both audience and critics alike. However, there are people who are making Avengers Endgame memes on Twitter and these memes are taking the internet by storm.

The memes of Avengers: Endgame, have been doing the round on social media ever since the makers had unveiled all the character from MCU’s last film. The moment when Marvel dropped the Avengers Endgame character poster, the internet did what it does best and RAN with this concept, creating a whole bunch of OTHER “Avenge the Fallen” posters for their favourite lost characters in pop culture.

The Avengers memes range from tear-inducing to hilarious, but they’re all awesome and are making everyone even more excited for Avengers: Endgame! we have scoured the internet and collected just a few of the best “Avengers Endgame” memes.

Here are Avengers: Endgame best & Hilarious memes as of now

Some memes are asinine and some are on point. This one is good. #AvengeTheFallen pic.twitter.com/cKHceaFshj

Son of a bench. I can’t believe it took me this long to think of this one. #AvengeTheFallen pic.twitter.com/CLhc0dkTGA

whoever made this, I thank you pic.twitter.com/dd4KtgftQA

Me looking at the avengers endgame memes after watching it #AvengersEndame pic.twitter.com/jJcWlOXAoL

Me looking at the avengers endgame memes after watching it #AvengersEndame pic.twitter.com/jJcWlOXAoL

Varun Dhawan Postpones His Engagement With Natasha Dalal For THIS Reason