The makers of Bala have dropped the first teaser of Bala starring Ayushmann Khurana, Bhumi Pednekar in the lead roles. 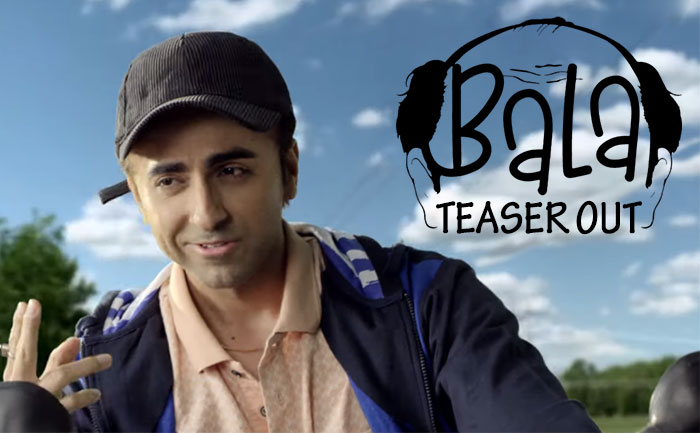 The makers of Bala starring Ayushmann Khurana has dropped the teaser of the film this afternoon. Notably,  Bala is one of Ayushmann Khuranna’s upcoming film which will hit the theatres on 22nd November 2019. The satirical black comedy film is being directed by Amar Kaushik and produced by Dinesh Vijan.

You can the teaser of Bala here:

Sharing Bala teaser on social media, Ayushmann Khurana wrote, It’s time to make some bold, oops bald moves!. Ayushmann Khurana’s Bala is likely to clash with Sidharth Malhotra and Tara Sutaria’s Marjaavaan. The film Marjaavan was supposed to hit the theatres on October 2 but not it has been pushed to 22nd November 2019.

Directed by Milap Zaveri of Satyameva Jayate fame, Marjaavan is bankrolled is backed by Bhushan Kumar’s T-Series along with Nikkhil Advani, Madhu Bhojwani and Monisha Advani.

Speaking about the film, “The film needs VFX especially with Riteish (Deshmukh) playing a dwarf. We want to offer the audiences the best. The team is on edit table working day and night to achieve the deadline. After several discussions, we have decided to release on a later date, and give a powerful film to our audiences,” Bhushan says.