Home > Gaming > The most useful console commands list for CS:GO

Here are some of the most useful and best console commands for Counter Strike: Global Offensive 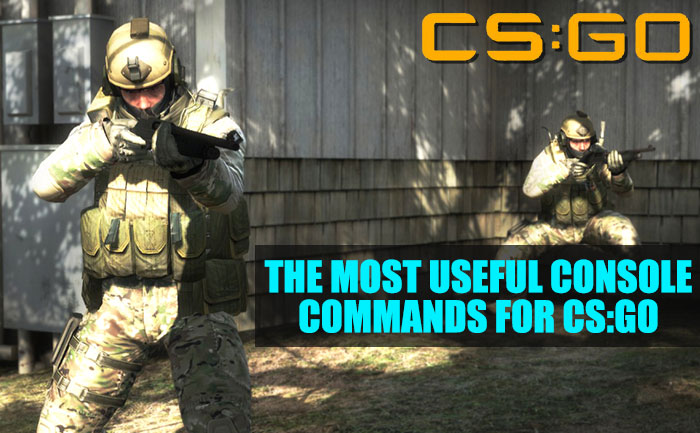 The most useful console commands for CS:GO: You must be looking for the most useful or best Counter Strike: Global Offensive (CS:GO) console commands, if our assumption is true, then you have come to the right place. Similar to other Valve’s video games, CS:GO also has a potential to exploit the power of the Source engine console and provide you scores of new options and settings.

If you ever played or have been playing Counter-Strike: Global Offensive, you must know that how a user can lose or win on the smallest of margins. What you all need to win the match is to have the best and most useful CS:GO console commands. How To Open Console On CS:GO

In this article, we have provided every useful information from which CS:GO console commands are the best to what you must change in your config files to give you the biggest advantage possible. The PC version of Counter Strike: Global Offensive provides more personlization features as comapred to console FPS games including Battlefield, Call of Duty, and Halo.

Making CS:GO video game more interesting, you will need some console commands that we have mentioned below. In order to use CS:GO console commands, you will have to open up the command console. Press the “ ` “ key on your keyboard while in-game or on the CS:GO home screen.

If it does not response, go to CS:GO game setting and check the “enable developer console” box. Once the console is open, type in one of any of these following CS:GO commands.

What are the best CS:GO Launch options? In order to launch options, you will have to head over to Steam and right click on CSGO and go to properties. Hit ‘Set Launch Options…’ and a box will appear. The syntax for commands put into this box is -[command] and then a space before the next one or any additional values that you might be asked.

The most useful console commands for Counter Strike: Global Offensive

This is regarded as one of the most useful CS:GO console commands, which allows users to see plenty of information related to your FPS (frames per second), ping, the tick rate of the server and more.

What you all just have to do is to press enter “net_graph 1” into the console and huge information will appear at the bottom right of your screen.

This CS:GO console command will come handy while maximizing your frames per second. This command will take lift restriction on your FPS, allowing you to reach the highest amount possible on your current PC.

Once you type “fps_max 0” to your console, you will witness a difference in your FPS in no time. We hope, you would be able to gather up those pesky frames you were missing and crush those toxic enemies.

This is also one of the best and useful CS:GO console commands we have listed here. Sometimes the Radar does not fetch the right information for us and misleads us, using this console command you could see the red dot show up firing on the edge of the circle but they could be just around the corner or the other side of the map.

The command will help you to center the radar so you can easily see all of the maps. It might take a little getting used to, but it’s worth it.

Did you ever go to catch a weapon off the ground in spawn and open up your buy menu? This CS:GO console command will avoid your “use” key (mine is E) from opening up the buy menu but, it will still allow you to pick up the weapon.

Its time to say bid adieu to running out of spawn with the buy menu up and stumbling over the AK on the floor and cruise forward to your inevitable victory.

This might be the newest console command to be added in the recent patch but is has been managed to enlist in one of the most useful CS:GO console commands. This allows you to see your teammates weaponry and utility loadout above their heads, putting an end to that frantic search for a teammate who has a flashbang.

The command will help you to counteract those noisy teammates or toxic deathmatch players who yell at everyone who try to be sociable. It reduces the voices of those in your lobby to make them listenable.

This console commands is the owner of the server gains power to allow any users within their server to activate almost any client-sided or server-sided console command they please. Think of it like you’re about to open Pandora’s box.

The command offers you to see where your bullets go client-side (red) and where the bullets actually land server-side (blue). Notably, it can only be executed in offline servers or servers with sv_cheats 1 enabled.

It’s like sv_showimpacts 1, but with your grenades instead. It’s good for grenade practice for executing pop-flashes, smoke directionality, and general grenade physics.

For the frag movie makers available out there, this one turns off the heads-up display (HUD) and shows only victims’ aliases in your clips.

This hidden nugget turns off the client-side bullet tracers from weapons including the M4A4 and AK-47.

When you are watching demos, players model movements can be observed through multiple walls to view player behaviorisms. It comes handy for seeing cases in the Overwatch system to convict wallhackers.

Using this CS:GO console commands, you can see what utility your teammates have for more efficient and more situational teamwork without having to ask, “What grenades do you have?”

This one’s a personal favorite. It makes mute all of your annoying teammates who won’t stop talking during momentum-changing clutch situations.

This console command comes with a small rectangular interface for demo-watching. It’s good for speeding up viewing, slowing down highlights, and manually loading demo files directly in your computer from third-party server hosts, such as FACEIT or ESEA.

Wow.. you have been given a god mod. Do you know that if you use god console command, you would not be killed or take any damage from other players. It also requires sv_cheats 1.

Similar to god mod, instead of dying you can go through walls, roofs, and the map skybox only if sv_cheats 1 is enabled.

This command makes your player commit suicide, but only with sv_cheats 1 on.

Exec is touted to be one of the most useful CS:GO console commands, which is the best for enabling private server configurations (.cfg files for practice, one-on-ones, etc.) that you can create or download from third-party websites. Make sure you have downloaded configs from safe and trusted sites. More on exec files here.

By using this console command, you can leave all server without wasting much time in the ESC menu.

The quit console command ends your game completely. Additionally, the “type quit smoking in console” joke told by trolls does the same exact thing, so don’t fall for that trick. This would not make you the next coldzera, but they might help you with the little things that really bother you over time.

These are most useful and best CS:GO console commands that you will need while playing the game. Be sure to visit our other guide and tips and tricks for better understanding about the game.