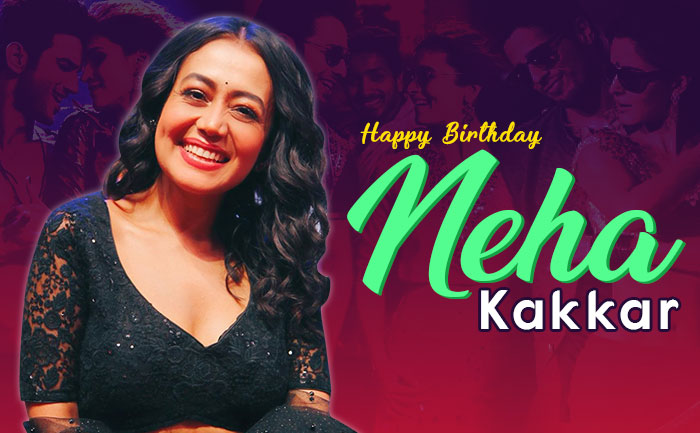 Neha Kakkar made her Bollywood debut as a chorus singer in the film Meerabai Not Out. However, the singer rose to prominence with the release of Second Hand Jawani from the movie Cocktail. She was also a part of the second season of the singing reality show, Indian Idol.

Neha Kakar has come a long way since then. She has given some blockbuster songs, from soulful romantic ballads to peppy dance numbers. As the singer celebrates her 32nd birthday today, let us take a look back at some of her best hits.

‘London Thumkda’ took over the wedding scene when it came out in 2014. The popular song from hit movie Queen was sung by Neha Kakkar, Sonu Kakkar, and Labh Janjua. Amit Trivedi is the music director of the song.

The song not only has catchy beats to groove, but it also has a lot of heart. You will find yourself swept away in the joy and energy of this peppy song by Neha Kakkar. Kangana Ranaut gives life to the song with her eclectic dance moves.

‘Kar Gayi Chull’ became quite the party anthem after it came out with Kapoor & Sons in 2016. The song was a recreation of a Haryanvi hip-hop song ‘Chull’ by Fazilpuria. Badshah produced and wrote the new version of the song and the original also featured him.

Kala Chashma ruled the party scene in 2016. The song is from the movie Baar Baar Dekho (2016) and while the film failed to impress the audiences, this song was the life of every party after its release. It has been filmed on Sidharth Malhotra and Katrina Kaif.

Neha Kakkar and Badshah lend their voices for this peppy and upbeat song. It is, of course, a remake of the Punjabi blockbuster song ‘Tennu Kala Chashma Jajta Ve’ (1990) by Amar Arshi.

Neha Kakkar recreated ‘Maahi Ve’ for the film Wajah Tum Ho in 2016. The original song was sung by Richa Sharma in Kaante (2002). Neha paired up with Amit Gupta to capture this melodious song. The song features Zareen Khan in a sizzling avatar.

Neha Kakkar seems to have a lot of party anthems in her song list. Another one of her foot tapping numbers is the song ‘Mani Tera Boyfriend’ from the movie Raabta (2017). It is a revamped version of J Star’s 2015 track. Neha teams up with Arijit Singh for this playful number.

Badri Ki Dulhania was sung by Neha Kakkar, Monali Thakur, Ikka, and Dev Negi. Tanisk Baghchi composed the music for the song. The light, peppy song perfectly captures the characters of Alia Bhatt and Varun Dhawan in the film.

Neha and Monali Thakur won joint best ‘Female Vocalist of the Year’ for the song at 2018 Mirchi Awards for the song.

Filmed on the Naagin fame actor Mouni Roy, ‘Gali Gali’ was a recreation of the 1989 song from Tridev. Neha kakkar does the recreation justice and her voice is the perfect match for Mouni’s sultry dance moves. Tanishk Bagchi and Rashmi Virag gave the music for the song.

Another recreation of a hit song, ‘Aankh Marey’ was first song by Kumar Sanu and Kavita Krishnamurthy for the film Tere Mere Sapne (1996). It was recreated for the 2018 film Simmba starring Ranveer Singh and Sara Ali Khan. While not quite the original, the recreation does have a spark of its own.

Speaking about being a part of chart-topper hits consistently, Neha told Indian Express:

Neha Kakkar recreated the Gajendra Verma song and released it on January 31, 2019. The song went viral with many stating that the song was for Neha’s ex-boyfriend Himansh Kohli. Neha has spoken about her breakup on social media.

Gajendra Verma is the original writer, singer, and composer of the song which is from the album Lost and Found.