Bigg Boss Hindi is one of the most popular Indian TV reality TV show. Check out the list of BB Hindi winners of all seasons. 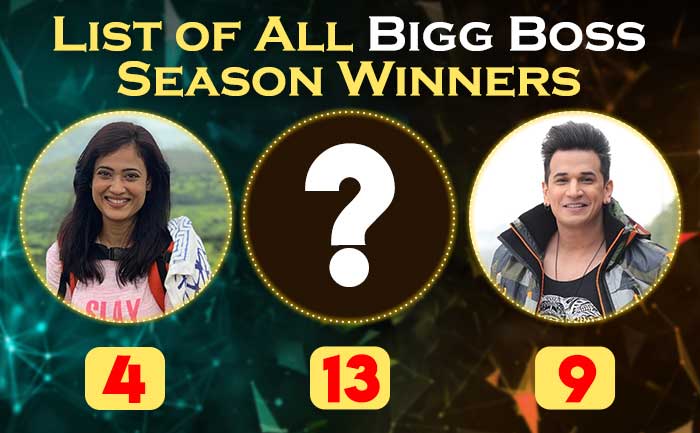 For the unversed, Bigg Boss is TV reality TV show airs on Colors TV channel in India. It is a Hindi version of Big Brother, which first developed by Endemol in the Netherlands. Over thirteen years, Bigg Boss has rolled out thirteen seasons and one spin-off version. Top Bigg Boss Winners List

let’s take a look at the winners of all season of Salman Khan’s Bigg Boss.

Bigg Boss Hindi: List Of All The Winners, From Season 1 To Season 13!

Ashutosh Kaushik is an Indian Tv actor and winner of MTV Hero Honda Roadies 5.0 in 2007. Besides winning the title of MTV Roadies, Kaushik won the coveted titled of Bigg Boss season 2. The 2nd season of BB was hosted by Shilpa Shetty.

Vindu Dara Singh is a known personality in the Indian film industry. He debuted in Hindi film industry with 1994 film Karan and went on to feature in a Punjabi film, Rab Dian Rakhan which was directed by his father. He also appeared in dozens of movies as a side actor. He claimed the title of Bigg Boss 3 winner. The 3rd season of BB was hosted by Amitabh Bachchan.

Shweta Tiwari is an Indian TV actress, who is popularly known for essaying Prerna Bajaj in Star Plus’ Kasauti Zindagii Kay. She had emerged as the winner of Bigg Boss season 4. Notably, Shweta Tiwari was the first female to claim BB trophy. The 4th season was hosted by Salman Khan.

Juhi Parmar is yet another TV actress who claimed the coveted title of Bigg Boss Hindi. Parwar is known for her role Kumkum in a TV show, Kumkum – Ek Pyara Sa Bandhan. Parmar was recently seen on TV show Tantra as Sumati Khanna. The fifth season of BB Hindi was hosted by Salman Khan.

Urvashi Dholakia is a popular TV actress, who rose to fame with playing Komolika Majumdar in  Kasautii Zindagii Kay and Queen Iravati in Chandrakanta. She won the title of Bigg Boss Season 6. The sixth season of BB Hindi was also hosted by Dabangg actor.

Gauhar Khan is an Indian TV actress and model. Besides acting in TV shows, she worked in a Bollywood film Rocket Singh: Salesman of the Year (2009), romantic comedy Badrinath Ki Dulhania (2017) and the Indian period drama Begum Jaan (2017) among others. Gauhar Khan emerged as the winner of BB S07. The seventh season of BB was hosted by Sallu.

Gautam Gulati is an Indian TV actor and model, who is known for his comical role in Pyaar Kii Ye Ek Kahaani and Diya Aur Baati Hum. In the year 2014, she participated in Salman Khan’s show and emerged as the winner of BB season 08. It was also hosted by Farah Khan with the twist of Halla Bol.

Prince Narula is surely a known personality in the TV industry. He participated in the ninth season of Bigg Boss and ended up winning the title. Besides winning BB Season 9 title, Prince Narula also won MTV Roadies 12. He also won multiple other reality TV shows titles.

Manveer Gurjar had written history by winning the title of Bigg Boss season 10. Yes, he was the first commoners who entered the house of BB and claimed the coveted title in 2016. The 10th season of Bigg Boss was also hosted by Salman Khan.

Shilpa Shinde is an Indian TV actress, who is popularly known for her role in daily soap opera Bhabhi and Angoori Bhabhi in & TV’s sitcom Bhabhi Ji Ghar Par Hai!. The gorgeous actress participated as the contestant of Bigg Boss seaosn 11 and came out as the winner. The 11th season was hosted by Salman Khan.

Dipika Kakkar is undoubtedly one of the most popular Indian TV actresses. She is known for playing Simar Bhardwaj in Sasural Simar Ka and portraying Sonakshi Rastogi in Kahaan Hum Kahaan Tum. She participated in the reality show Bigg Boss 12 and came out as the winner in 2018. The grand finale of Bigg Boss 13 has finally aired on February 15, 2020. Yes, the name of BB 13 winner is announced and it is not what Google Search had declared. Yes, Sidharth Shukla, who was one of the most searched Indian TV actors of 2019, has won the title of Bigg Boss 13.

For more such interesting and Entertainment News, Stay tuned to The Live Mirror.