It looks like Google has already declared the winner of Bigg Boss 13. 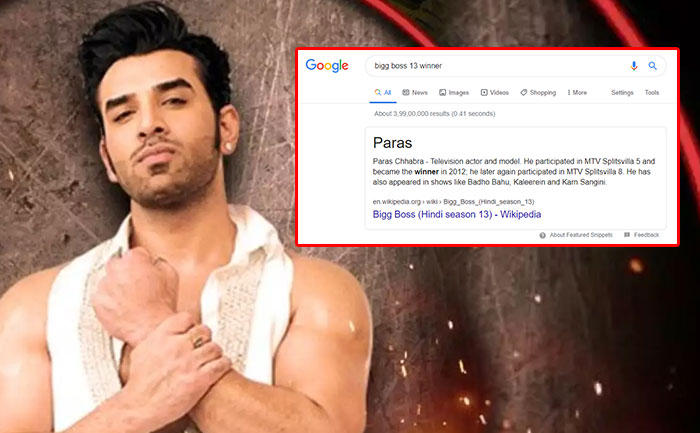 The finale of the controversial reality show ‘Bigg Boss 13’ is just a day away (15th February 2020) and as we all are voting for our favourite contestants to win the trophy, now it looks like Google has already announced the Bigg Boss 13 winner. Bigg Boss Hindi All Seasons Winners

As per, Google searches the winner of Bigg Boss season 13 is Paras Chhabra. Yes, you read it right!

Paras Chhabra has been hitting the headlines ever since his closeness with ex-contestant Mahira Sharma as increased in spite of being in a relationship with model and actor Akanksha Puri.

Talking about his professional front, Chhabra started his career in 2012 by participating in MTV India’s ‘Splitsvilla 5’, emerging as the winner with Akanksha Popli and next, he was a part of Channel V India’s ‘V The Serial’ opposite Sara Khan. Once again, in 2015, he participated in MTV India’s Splitsvilla 8.

In 2018, Paras played the role of Tommy Singh in ‘Kaleerein’, Duryodhan in ‘Karn Sangini’, Ravan in ‘Vighnaharta Ganesha’ and ‘Soham in Aghori.’

However, there are other names such as Sidharth Shukla, Rashami Desai, Shehnaaz Gill and Asim Riaz who are enjoying tremendous support from their fans and, have the potential to emerge as ‘Bigg Boss 13’ winner.

Well, it is too early to predict any news related to Bigg Boss 13’s winner. To know who brags the trophy watch the finale episode of the reality show tomorrow (15 February 2020)

Who do you think will win the ‘Bigg Boss 13’ trophy? Let us know your view in the comments below.