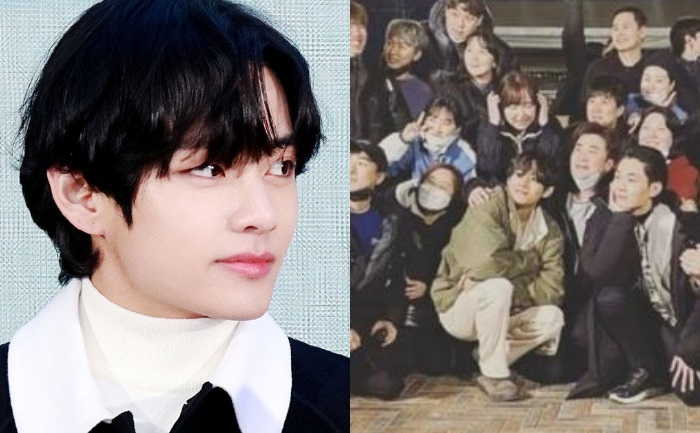 The world has come o standstill due to the COVID-19 scare that has sent global citizens to self-isolation. Events and games around the globe too have been postponed so have the concerts and movie release dates. One of the most popular K-POP group BTS too had to cancel 4 of their Seoul concerts for the Map of the Soul Tour. The ARMY was quite disappointed but was elated when BTS member V released his solo single, Sweet Night for Itaewon Class OST.

Recently there were reports that Taehyung had visited the sets of Itaewon Class to show his support for the lead actor and close friend, Park Seo-Joon. V and Park Seo are close friends after they got to know each other while filming the drama “Hwarang” in 2016.

Now, a staff member of the Netflix K-drama shared the photo on their Instagram. The idol had apparently come through to support his good friend, Park Seo Joon, as the drama’s filming wrapped up. V was spotted in the front row of a group photo taken at the end of filming and uploaded to a staff member’s Instagram. Though the staff member later deleted the post. Here is a screenshot of the now-deleted post. In the picture, V is seen all smiles posing with the cast and crew of Itaewon Class. In the snap, TaeTae is seen wearing a camouflage overcoat with cream-colored pants and beige shoes.

BTS also shared a video recently for ARMY, urging them to stay strong during the coronavirus scare, which has become a deadly pandemic.