Butter Song Out: BTS is back with a smooth and colorful track

BTS brings new surprises for ARMY's in their new complete English track Butter. It is colorful and features the septet in a very stylish way 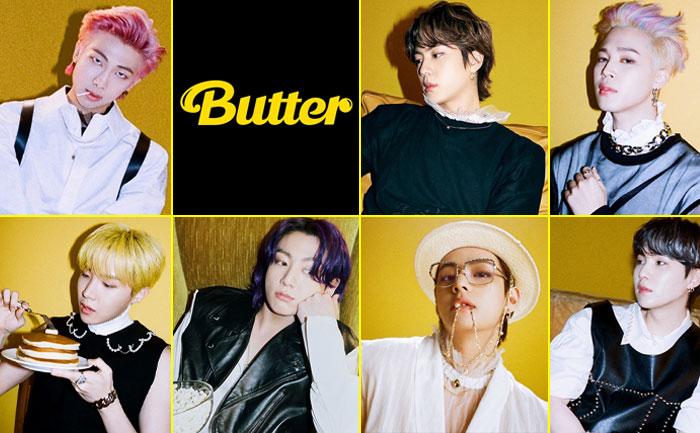 Kpop band, BTS surely knows how to melt their ARMY’s heart. The boyband has finally released its much-anticipated Butter song on Friday. All the members are featured in a more stylish way and it’s all thing colorful just like the Dynamite song. The septet never fails to mention ARMY with a special gesture in the song.

The song starts off featuring Jungkook, who sings- Smooth like butter. Like a criminal undercover. Gon’ pop like trouble. Then it takes us to all the seven members. From Suga-RM’s complete English rap lines to Jimin’s rainbow hairstyle, V’s absolute killing antics, Jungkook’s purple hairstyle and the way they formed ARMY showcasing the initials in the song is sure to melt your heart. So, hold your breath and watch the complete song right here below.

Check out the official music video for the BTS Butter song:

This marks BTS’s second complete English track after the massive success of their song- Dynamite. After treating their ARMY’s with the Butter song, Bangtan Boys will be seen performing at the Billboard Music Awards which are slated to take place on May 23. This will be BTS’s debut stage performance on the Butter song.

Arijit Singh’s mother Aditi passed away due to cerebral stroke