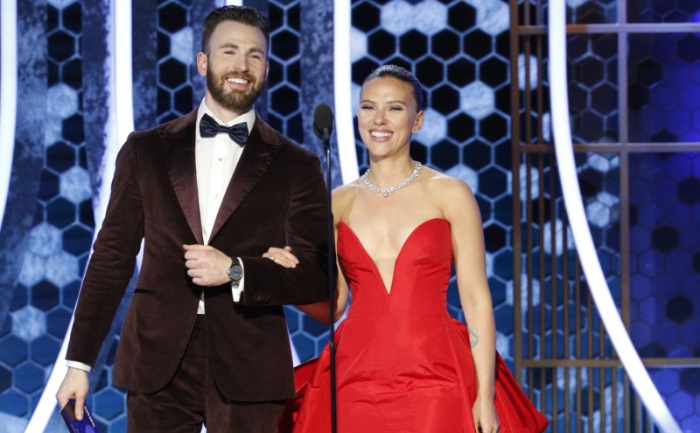 The much-awaited Golden Globe awards 2020 took place at the Beverly Hilton Hotel in Beverly hills. The cream of Hollywood graced the event. ‘Avengers’ costars Chris Evans and Scarlett Johansson too were a part of it. They presented two awards, but what caught the attention of fans was Chris Evans chivalry. He helped Johannsson with the train of her dress. Yes, Chris moved the train of Johansson’s dress out of the way so she wouldn’t trip over it.

Here is a clip from the occasion, where Evans can be seen picking up the train of the gown after noticing the Marriage Story star struggling to move it out of the way as they presented an award together.

Chris Evans helping Scarlett Johansson with her dress on stage had me 🥺!

Fans were bold over by Captain America’s gesture as he was seen moving the train of the Black Widow stars voluminous red Vera Wang dress out of the way, preventing her from tripping over it. Fans took to Twitter to praise him.

The actors are firm friends, having starred in several Avengers films together – Evans in his role as Captain America and Johansson as Black Widow.

The most significant Golden Globe win of the night so far: Taron Egerton beats Leo and Eddie, may well be on his way to an Oscar nom! pic.twitter.com/hmOG1uLB2I

Chris helping Scarlett with her dress is just 🥺🥺 pic.twitter.com/2rPBAhvH6k

At the 77th Golden Globes, Evans attended the awards night with his brother, Scott Evans. Johansson was seen with her fiancé Colin Jost. She was also nominated for an award for her role in Netflix’s “Marriage Story.”

Also Read: Chris Evans opens up on why he loves Thor’s hammer in Avengers: Endgame