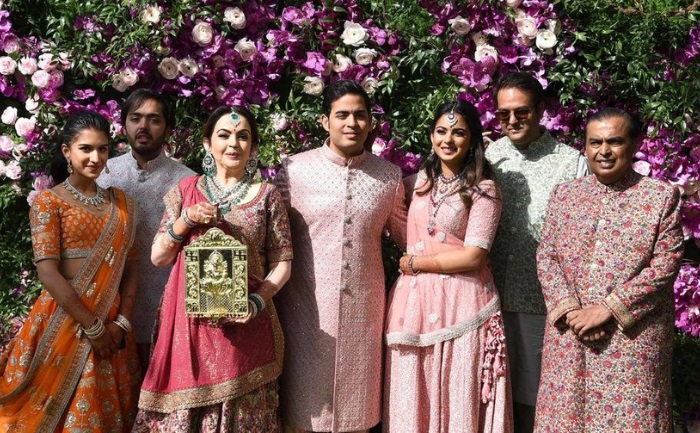 As part of their annual ritual, and to welcome 2020 with open arms, the annual Reliance Family Day was embraced by the entire Ambani family New Year’s eve. The representatives of Reliance Group were gathered at the Ambani’s property in Jamnagar, Gujarat. At the occasion, Mukesh Ambani and Nita Ambani were joined by their twins, Isha Ambani and Akash Ambani, along with their mates, Anand Piramal and Shloka Mehta, respectively.

As per ‘Janta Ka Reporter’, this day was considered as the tenth anniversary of the Reliance Foundation. Isha Ambani proudly announced that their Reliance group has grown to 6.5 lakh strong, to which Akash continued, That’s right. And since the last Family Day celebrations, our families have grown too. Isn’t that Isha?” Isha replied, “Yes they have Akash. Shloka and Anant, a very warm welcome to your first Reliance Family Day.”

The event was also graced by some Bollywood personalities including Aamir Khan, Riteish Deshmukh, musicians Salim and Suleman Merchant. The musician duo also took to the stage to perform on songs such as Shukran Allah and Tauba Tauba.

Here are the photos and videos from the event.

A post shared by Shloka Ambani Encyclopedia (@shlokaakashambani_fp) on Jan 2, 2020 at 12:44am PST

[Video] Sh.#MukeshAmbani with #AkaShloka arrive for the New Year's Eve celebration in Jamnagar, Gujarat😍 . . (The credit of these videos goes to the uploader only) #AkashAmbani #AnandPiramal #ShlokaMehta

A post shared by Shloka Ambani Encyclopedia (@shlokaakashambani_fp) on Jan 5, 2020 at 9:30pm PST

A post shared by Shloka Ambani Encyclopedia (@shlokaakashambani_fp) on Jan 6, 2020 at 2:11am PST

We wish the Reliance family, a successful future ahead!