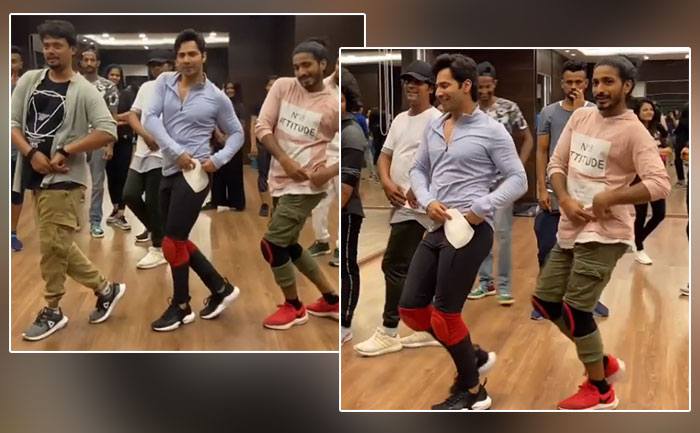 Bollywood heartthrob Varun Dhawan will soon be seen in the remake of ‘Coolie No 1’. The ‘Judwaa 2’ star will be romancing Sara Ali Khan in the film that is being directed by his father David Dhawan. The movie had gone on floors back in August and is now being shot in Mumbai. Pictures and videos from the sets have been trending on social networks. Recently a video of Varun Dhawan’s dance rehearsals went viral on the internet.

Check out the hilarious video shared by Varun Dhawan here:

In the video, we can see Varun Dhawan trying his hand at some thumkas that he found a bit tough. The October star is seen dressed in a tee and black tights with knee cuffs. As Varun shakes a leg, the female choreographer is impressed and expresses her elation too. Netizens were left in splits at Varun’s attempt.

Varun had earlier shared a picture from the film featuring his co-star Sara Ali Khan. Along with the post he wrote, “He’s a COOL ie बहुत काम कराती हैं yeh Sara Ra”

Coolie No 1 is being produced by Vashu Bhagnani, Jackky Bhagnani, and Deepshikha Deshmukh. It is an official remake of the 1995 comedy classic bearing the same name. The original film stars Govinda, Karisma Kapoor and Kader Khan in key roles and had opened to great reviews.

Also Read: Varun Dhawan & Janhvi Kapoor play paintball with a fan for a cause