On Monday, Ayushmann Khurrana and Rakul Preet Singh have kickstarted the preps for their upcoming Bollywood film, ‘Doctor G.’ This marks the first time the duo will be collaborating and marks the directorial debut of Anubhuti Kashyap, Anurag Kashyap’s sister.

The duo shared pictures on their Instagram stories as they began the preparation. The ‘Vicky Donar’ actor shared a picture of the script of ‘Doctor G’, which featured a highlighter pen and a few pens, and wrote, “And it begins!” 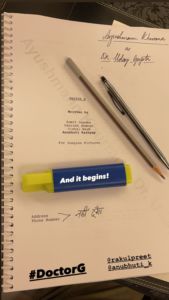 Rakul also shared a photo on her Instagram story and wrote: “And it begins…#DoctorG” 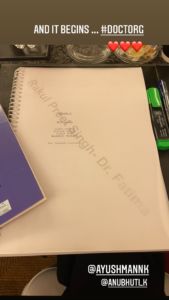 In another picture, Ayushmann is seen standing with Rakul and they have their scripts in their hands and he wrote, “Readings have started. Will be filming later this month. #DoctorG.” 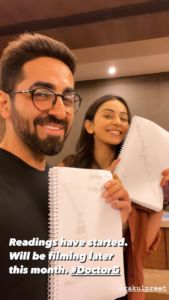 Ayushmann will be essaying the role of Dr. Uday Gupta, while, Rakul will be seen as Dr. Fatima, a medical student. ‘Doctor G’ will be produced by Junglee Pictures, who has earlier made ‘Bareily Ki Barfi’ (2017) and ‘Badhaai Ho’ (2018) with the actor and has been written by Anubhuti, Sumit Saxena, Saurabh Bhat, and Vishal Wagh. The film is a comedy-drama that will be based on a campus of a medical institute.

On the work front, Ayushmann will be seen next in ‘Chandigarh Kare Aashiqui’ with Vaani Kapoor and also in Anubhav Sinha’s ‘Anek.’ Whereas, Rakul will be next seen in ‘MayDay’ with Amitabh Bachchan and Ajay Devgn. Next in,  Ajay Devgn’s ‘Thank God.’