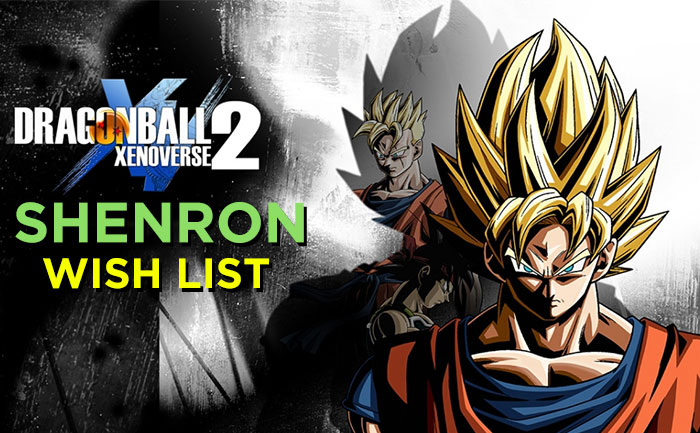 If you create a list of Shenron wish, it will allow you to unlock Hit, Eis, Nuova and Omega Shenron. If  you select the wish “I want more usable characters” you will first unlock Hit from Dragon Ball Super. Once you have Hit as a playable character, making the same wish list again will give you a choice between Eis and Nuova, the Black Dragons from Dragon Ball GT.

If you want to make the list for the third time, you would be allowed to pick all the characters you missed for the first time between Eis and Nuova. Making the same list again will give you an option to unlock Omega Shenron from Dragon Ball GT.

If you do not know how to unlock transformations such as Sauper Saiyan, we have brought you everything to you. The most important thing is that you must have Dragon Balls to make your wish, but don’t worry we have covered that as well.

I Want Money — Using this wish, you are likely to get Zeni as a reward.

I A Rare Item – You will get Goodie Radish accessory.

I Want To Dress Up –  The Crystal Battle Suit Outfit, second wish is Gold Outfit.

I Want To Get Stronger – You will get 6 Echo Soul devices for mixing Super Souls.

I Want To Grow – Using this Shenron wish, you will gain 1 level, best used when the EXP for leveling is getting crazy.

I Want A New Ultimate Attack – First is Time Skip/Moloto, Hits Ultimate and second is Ice Canon, which we think it the Ice Shenrons attack.

I Want More Usable Characters – Using this Shenros wish, you will receive more characters to select from. As we have mentioned above that the first character you will unlock is Hit, and we have no idea who Hit is? He is said to be a Purple bald headed person, who uses all strike Supers and only has a single utlimate, just a warning before picking this.

I Want A Second Chance At Life – If you a second attempt in Dragon Ball Xenoverse 2, you can get by using this Shenron wish and put them wherever you want.

I Want To Be Drop Dead Gorgeous – If you are not happy about your look, you can get new look or recreate by using this wish.

I Want Medals – Using this, you can get upto 10 TP Medal

I Want To Dress Up More! – This wish will give you the Turtle Hermit Set, which is an accessory that comes with the Roshi Glasses, his beard and mustache and the Turtle shell on your back.

I Want Another New Super Attack! – Notably, Dragon Flash Bullet is the first move you can get using this wish. If you already have, you can pick it and just get if off the list.

I Want Another New Ultimate Attack! – Using this Dragon Balls, you can get Minus Energy Ball from this wish. The attack works in this one but it takes 5 Ki bars and takes a VERY long time to get off, I had a hard time landing this one.

I Want A Full Stomach! – This wish can give you 30 pieces of pudding which you can feed to buu to get more of his family to spawn or to his family to get them to go out and get items.

Besides Dragon Ball Xenoverse 2 Shenron wish list, you can check out our other articles, guides and tips and tricks article for better understand.