Bigg Boss 13: Netizens trends #BoycottBiggBoss13 and #JehadFelataBiggBoss for making a Hindu girl sharing a bed with a Muslim boy in this season. 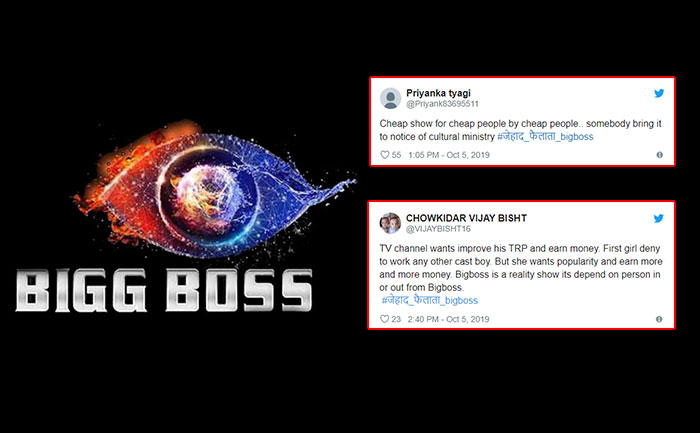 It would not be wrong to say, controversial celebrities, huge fights, drama and romance have become synonymous with the Bigg Boss house. The reason behind it as people belonging to different caste, religion, and walks of life are locked in a house for so many days. The reason behind the latest controversy is no different. Yes, the makers of Bigg Boss Hindi are being slammed for making a Hindu girl share bed with a Muslim guy.

In the 13th season of Bigg Boss, all-female contestants are supposed to share a bed with a male contestant. The concept did not go down with netizens and they slammed the makers and urges viewers to boycott Bigg Boss 13.

The controversy started with an old photo of Bigg Boss 9 contestant showcasing a woman and man are sleeping on the same bed. A user took to Twitter and urged viewers to boycott Bigg Boss season 13 and alleged that they are doing nothing but spreading Jehad. His tweet grew to such an extent that a hashtag #JehadFelataBiggBoss started trending in the top of Twitter.

TV channel wants improve his TRP and earn money. First girl deny to work any other cast boy. But she wants popularity and earn more and more money. Bigboss is a reality show its depend on person in or out from Bigboss.
#जेहाद_फैलाता_bigboss

#जेहाद_फैलाता_bigboss
Why they want to defame our sanatan Dharma…? Our Sanatan Dharma is a beauty of Bharat…Don't try to break our cultures..
We respect to others religion's but not jihadi ideology…. #BoycottBigBoss #ban_biggboss pic.twitter.com/lvjhWFgqBU

There is a section of people questioned how a Brahmin girl Mahira Sharma can sleep with a Muslim boy Asim Riaz? Notably, the photo is fake and not even from this season. The black and white photo is an old photo featuring Suyyash Rai and Kishwar Merchant who participated in ‘Bigg Boss 9’ and got married after the show.