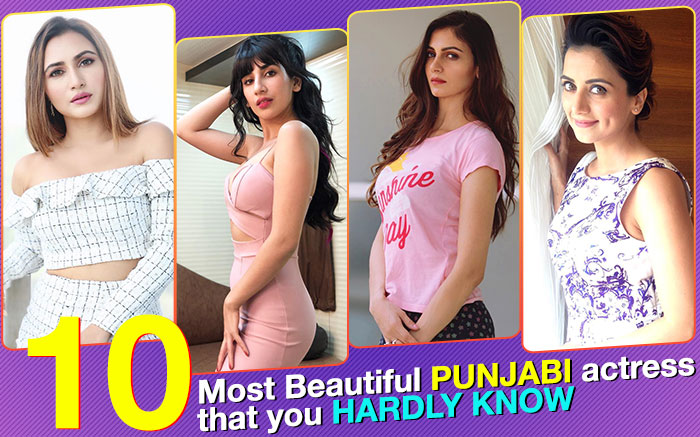 Punjabi Cinema which is known as Pollywood has become one of the largest film industry. Yes, there are several beautiful Punjabi actresses who have made their ways in Bollywood and carved their niche. We all know that Punjabis are known for their different but cool attitudes. In this article, we have curated a list of top 10 hot Punjabi actresses along with their names and photos.

Simran Kaur is a Punjabi actress, model and ex-Femina Miss India and Miss India Universe 2008. She made her acting debut with a Hindi film titled ‘Jo Hum Chahein in the year 2011. This is one of the hottest Punjabi Actress, who debuted in Punjabi cinema with “Best of Luck” which is touted to be one of the highest grossing Punjabi movies.

Apart from Bollywood or Pollywood, Simran Kaur has also worked in Tollywood film Potugadu, opposite Telugu movie star Manoj Manchu, which turned out to be a blockbuster. This hot Punjabi actress was last seen in Kapil Sharma starrer “Kis Kisko Pyaar Karoon”.

Parul Gulati is one of the most successful and beautiful Punjabi actresses, who has appeared in several Punjabi movies. Apart from movies, Gulati has been featured in many TV series such as P.O.W.- Bandi Yuddh Ke and Haq Se (2018) Web Series – An adaptation of Little Women, Gulati plays “Jo March”.

Parul Gulati was also featured in Netflix production Selection Day, which is based on Aravind Adiga’s 2016 novel of the same name. She has also acted in Girls Hostel (2018-19)for The Viral Fever Girliyapa. Apart from movies and Web series, Parul Gulati is a brand ambassador for many brands and products.

Talking about her Punjabi films debut, she made alongside an actor with the Punjabi hit movie, “Sadda Haq” which made her more popular in youths. Currently, she is regarded as one of the best actresses and has several films in her kitty.

#throwbackthursday ??? Short hair. And short tempered. Not something I'm proud of. Working on it every single day ??‍♀️ Photo – @rafique_sayed #tbt

Gul Panag is one of the most beautiful Punjabi Actresses in recent time. Panag is not only a stunning actress but also is a former beauty queen, who competed in the Miss Universe pageant. Gul Panag made her acting debut with 2003 film Dhoop. Following her debut, she has worked in many movies such as Jurm and TV series Kashmeer. Her first Punjabi movie was Sarsa.

Panag has also appeared on the front page of Maxin in September 2008. Apart from movies, she contested 2014 Lok Sabha Election from Chandigarh as an Aam Aadmi Party member.

The most beautiful and hot Punjabi actress, Surveen Chawla started her acting career with TV soap operas. Later, she appeared in several movies and made her acting debut with Kannada movie titled “Paramesha Panwala” in 2008. She made her acting debut in Punjabi Cinema with “Dharti” and later she worked in so many films such as “Taur Mittran Di”, “Saadi Love Story”, “Singh vs Kaur”, “Lucky Di Unlucky Story” and “Disco Singh”.

Kainaat Arora is one of the hottest Punjabi actresses. She made her debut in Hindi film industry with Grand Masti, which earned more than Rs 100 crores at the box office window. She also appeared in Mankatha and Khatta Meetha and sang in Malayalam films.

Apart from Bollywood, she has worked in many Punjabi movies like Faraar in 2015.

Neetu Singh is an Indian model and actress who mainly appears in Punjabi movies. She rose to fame when she won Miss PTC Punjabi in the year 2008. Soon after her recognition, she was roped in for a famous music video called ‘Call Jalandhar Ton’  by Harbhajan Maan.

This hot Punjabi actress made her acting debut with Dil Tainu Karda Ae Pyaar with Gulzar Inder Chahal in 2012. She has also worked in Bollywood movie titled Special 26, which released in 2013.

Kulrak Kaur Randhawa is a very talented Punjabi actress, who mainly appeared in Hindi or Punjabi movies. Kulraj Randhawa debuted with film Mannat in 2006. The hottest Punjabi actress is known for her portrayal in “Kareena” role acting in the popular tv show Kareena Kareena.

Be everything your heart wants you to be, all at once Don't listen to people who say, You Can't! Only do it, if you have the courage to keep going. ❤️? #gyaanmaata #dhrritisaharan PC @akulgilchephotography

Dhriti Saharan is one of the most gorgeous actresses in Punjabi Cinema. She debuted in Punjabi with Pure Punjabi for which she was nominated for the Best Debut Actress Category at the PTC Punjabi Film Awards in 2013. Apart from movies, she is featured in the video for the hit song titled “Billo Thumka” from the film Pinky Moge Wali. After Pure Punjabi, she has worked in Sadda Haq and for that, she won the Critics Choice Award for Best Actress at the 2014 PTC Punjabi Film Awards.

Apart from Punjabi movie, she has acted in the Telugu film Love Touch and Teri Meri Ek Jindari, directed by Partho Ghosh.

Mahi Gill is an Indian actress who mainly appears in Bollywood or Punjabi movies. Gill is popularly known for her role of Paro in Anurag Kashyap’s critically acclaimed Hindi film Dev.D. Gill made her acting debut with the Punjabi film based Bollywood film Hawayein and has done a couple of Punjabi films along with theatre.

She rose to fame with her portrayal of Madhavi Devi, a sexually frustrated wife in Saheb, Biwi Aur Gangster, as well as its sequel, Saheb, Biwi Aur Gangster Returns. She also appeared in Paan Singh Tomar with Irrfan Khan. It is the true story of an athlete who became a dacoit. In this film, she essayed the title character’s wife. She did her first ever item number in Tigmanshu Dhulia’s film Bullett Raja.