Janhvi Kapoor is currently gearing up for the release of Roohi. On Saturday, she rang in the celebrations of her 24th Birthday Janhvi Kapoor is currently gearing up for the release of her horror-comedy, Roohi. She is sharing the screen space for the first time with Rajkummar Rao and Varun Sharma for Dinesh Vijan’s film. While being busy promoting this upcoming film, she rang in the celebrations of her 24th Birthday. She also treated her fans with the inside glimpse from the cake-cutting session.

Birthday girl, Janhvi Kapoor took to her Instagram stories and shared a video showcasing the yellow-colored Birthday cake and she captioned the video with “thank you”. Including Janhvi’s stylist, few other people have shared pictures from the celebrations. Dressed up casually in her pink pajama’s she looked awestruck in the pictures. Take a look at the inside glimpse from the celebrations. 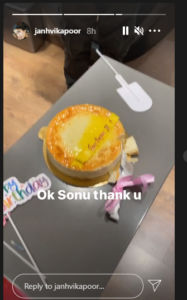 We the team of The Live Mirror wish the actress a very Happy Birthday.

On the movies front, Janhvi Kapoor has interesting films in her kitty currently. She is releasing Roohi on March 11. In this one, her character gets possed by a ghost, who abducts brides from their honeymoons. Janhvi has also been gearing up for Dostana 2 and Takht. She is also apparently doing a Tamil film, titled, Valimai.

Nawazuddin Siddiqui and wife Aaliya mend differences, to not get divorced