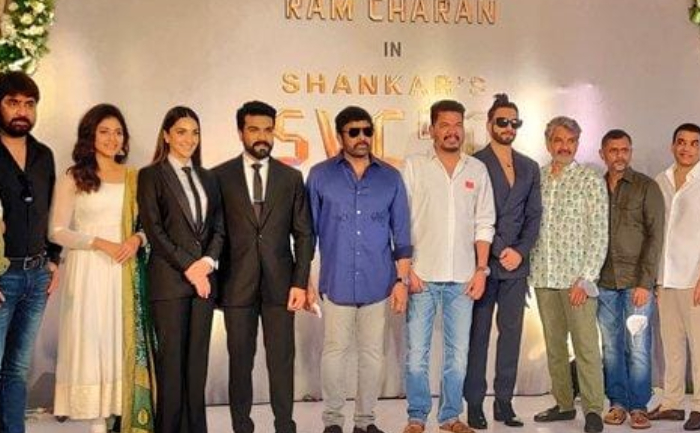 Bollywood actress, Kiara Advani was spotted at the Hyderabad airport on Tuesday (September 7). The actress jetted off apparently to attend the Mahurat session of upcoming film helmed by Shankar. #RC15 i.e. Ram Charan’s 15th movie is one of the most anticipated project. Ranveer Singh, Chiranjeevi, SS Rajamouli and others also make a splash at the Mahurat shot today. The first clap for the shot was done by Ram Charan’s father, Chiranjeevi.

The makers planned for a grand Mahurat shot event on Wednesday (September 8). Several renowned people from the industry marked their presence alongside the cast and crew. Kiara Advani will be featured as the leading lady in this flick and thus the actress is said to be prepping for the role. RC15 is a trilingual film and its full-fledged shooting is expected to commence sometime later this month.

The pictures and videos from RC15 Mahurat shot goes viral on the internet. Check out the glimpse here below:

The Star Guests And Star Cast Of #RC15 ✨🌟 pic.twitter.com/fhbOoGPNDH

Official title for RC15 has not been unveiled so far. Ever since Ram Charan and Kiara Advani were spotted meeting each other, their fans started speculating about a possible collaboration for film. It is to be shot simultaneously in Tamil, Telugu and Hindi languages. The cast and crew of RC 15 is expected to be announced soon.