Have a look at the yummiest Navratri Thaali that will make you hungry more than ever. 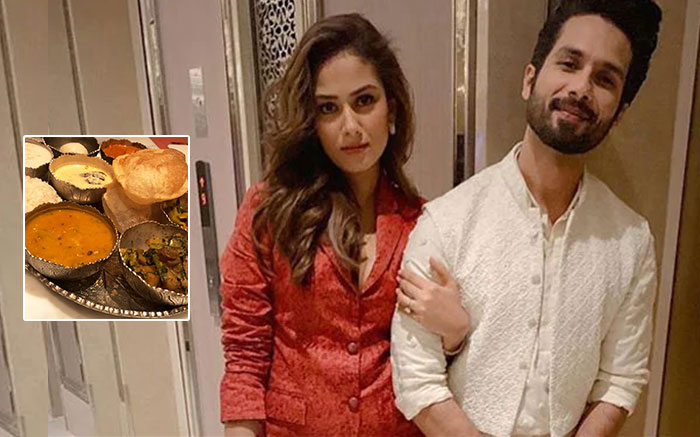 This Navratri a lot of things are happening. Many Bollywood celebrities enjoy Navratri by attending dandiya and garba events. But it seems like Mira Rajput’s way of celebrating Navratri is in a traditional way like all the people celebrate. Making sumptuous food and gorging over it.

Mira Rajput turned to Instagram by sharing her posts of what her thaali contains and the special menu on the list. Here’s a glimpse of the photo for you to have a look at it. She enjoyed these delicacies with her husband Shahid Kapoor. Her caption read ”Can’t resist”. The menu as delectable had a variety of dishes that will only fuel the fire and make you hungry. The menu showed the list of food items such as Rosgulla, Ghee Bhat, Kakara, Luchi, Bhoger Khichuri, Chennar Dalna, Dalama, Dahi Baigana Chunin Aloo, Labra, Raita, Janhi Alu Bhaja and more.

Shahid Kapoor and Mira Rajput are such a lovely couple that every time they are seen out together, people can’t keep their eyes to themselves. They make major couple goals. Lately, Mira and Shahid had a photoshoot for a magazine. They looked stunning in the photo shoots.

Parents to two children Zain and Misha, they have been married for four years blissfully. On career front, Shahid Kapoor was seen in the hit box-office Kabir Singh. The director of the film was Sandeep Reddy Vanga. Kabir Singh was a remake of Telugu film Arjun Reddy. Kiara Advani was also in the lead roles in the movie Kabir Singh.

Also Read: Deepika Padukone The Only Indian Actress In The BoF 500 List