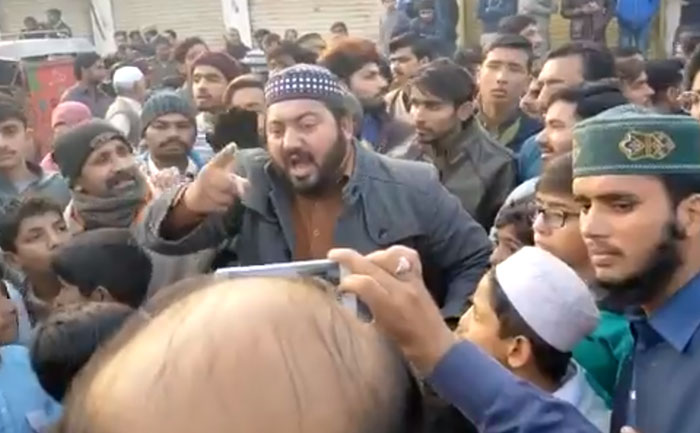 An angry mob of local residents resorted to stone pelting at Nankana Sahib Gurdwara in Pakistan on Friday evening. The gurdwara is at the site where the founder of Sikhism, Guru Nanak Dev, was born. It is considered to be one of the holiest Sikh shrines. Many devotees were trapped inside the Gurdwara as it was surrounded by angry Muslim residents.

#WATCH An angry mob shouts anti-Sikh slogans outside Nankana Sahib Gurdwara in Pakistan’s Punjab. Earlier stones were pelted at the Gurdwara led by the family of a boy who had allegedly abducted a Sikh girl Jagjit Kaur, daughter of the Gurdwara’s pathi. (Earlier visuals) pic.twitter.com/xyNkhsrhR9

In a video shared by News Nation, one of the protesters was seen saying that locals were against the presence of the gurdwara there. Also that they will not let any Sikh live there and will soon change the name of the place from Nankana Sahib to Ghulamaan-e-Mustafa.

“We will not let any Sikh live in Nankana Sahib, and will change its name to Ghulam Ali Mustafa,” says a protester #Pakistan

The situation at Gurdwara Janamasthan #NankanaSahib is still tense – police is trying to control the situation – number of people have surrounded Gurdwara building. pic.twitter.com/vmpMGSH8vf

I urge @ImranKhanPTI Ji to take immediate action on such communal incidents that are increasing the insecurity in the minds of Sikhs of Pak@thetribunechd @PTI_News pic.twitter.com/IlxxBjhpO2

Punjab Chief Minister Captain Amarinder Singh also tweeted and asked Pakistan Prime Minister Imran Khan to “immediately intervene to ensure that the devotees stranded in Gurdwara Nankana Sahib are rescued and the historic Gurdwara is saved from the angry mob surrounding it.”

But Pakistan has dismissed these claims about Gurdwara Nankana Sahib near Lahore had been vandalized by a mob. The Pakistan Foreign Office, in a midnight statement, said provincial authorities in Punjab province had informed it that a scuffle had broken out in Nankana Sahib between two Muslim groups at a tea stall. The district administration immediately intervened and arrested the accused, it added.

We shall soon update you with more information on this matter.