Check out the biggest movie release of this week 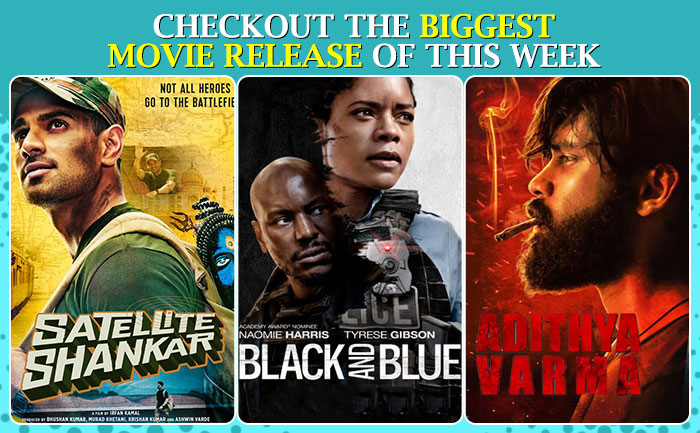 The eleventh month of 2019, November has already started. Last week we had Bala, Satellite Shankar, and  Midway hitting the big screens.  Here we bring for you the movies releasing this week on Friday (November 15 ), you must be thinking about it. Unlike last week, several Telugu, Tamil, Malayalam, Hollywood and Hindi movies such as  Marjaavaan, Charlie’s Angels, Action and others will be releasing this week on 15th November 2019.

As we all know, almost all Bollywood, Telugu and Malayalam movies get released on Friday in India. For true movie lovers, we have brought the list of latest Bollywood and Hollywood updates regarding the movies releasing this Friday (November 8). This article is updated every week.

Motichoor Chaknachoor is an upcoming 2019 Indian Hindi-language comedy-drama film directed by Debamitra Biswal and produced by Rajiv and Kiran Bhatia. Starring Nawazuddin Siddiqui and Athiya Shetty in the lead roles

Charlie’s Angels is an upcoming American action comedy film directed by Elizabeth Banks, who also wrote the screenplay, from a story by Evan Spiliotopoulos

Ford v Ferrari (titled Le Mans ’66 in the UK and other territories) is a 2019 American biographical sports drama film directed by James Mangold, and written by Jez Butterworth, John-Henry Butterworth, and Jason Keller.

Action is an upcoming 2019 Indian Tamil-language action film directed by Sundar C. and produced by R.Ravindran under his banner Trident Arts. The film features Vishal and Tamannaah in the lead roles.

Enai Noki Paayum Thota is a romantic thriller directed and produced by Gautham Menon. It features Dhanush and Megha Akash in lead roles. A regular college student Raghu gets dragged into chaos when he falls in love with Lekha. What starts as a whirlwind romance pulls Raghu into controversies that change the course of his life.

Sangathamizhan is an upcoming Tamil language action drama written and directed by Vijay Chandar. The film stars Vijay Sethupathi in a double role for the first time. Nivetha Pethuraj and Raashi Khanna are seen in the main Female lead roles.

Fatteshikast (English: Win & lose) is an Indian Marathi language historical period drama film directed by Digpal Lanjekar and produced under the banner of Almonds Creations in association with A A Films.