Known for her wink, Priya Prakash Varrier tries to kiss cinematographer Sinu Siddharth and now she is left disappointed. Have a look! 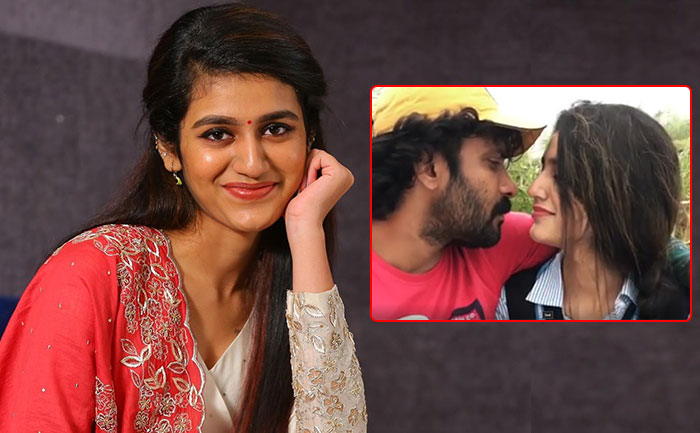 The famous wink girl, Priya Prakash Varrier is now again the talk of the town. The actress gained fame overnight for a small clip of her movie Oru Adaar Love.

Her song Manikya Malaraya Poovi song where she was seen winking at a guy. In the song, Priya was seen portraying old-school romance where she is seen flirting with a guy with expressions in a school auditorium full of people. Their heart-warming expressions won every heart and people loved Priya’s wink!

After this video, Priya was declared as “National Crush”. Her smile and her wink became the reason for her popularity. Now she has more than 7 million followers on Instagram.

Priya Prakash recently caught everyone’s attention again after she shared a video wherein she is trying to kiss the cinematographer Sinu Siddharth on Instagram. The video comes with a twist in the end. Watch it here :

The throwback video now has more than 1.5 million views and thousands of comments. In the video, Priya is trying to kiss her friend and cinematographer Sinu Siddharth. They are very good friends and have worked together in Oru Adaar Love. Although the film received mixed reviews, Priya really got the fame at a very young age.

The 19-years-old actress is ready to debut in Bollywood with the film, Sridevi Bungalow. Arbaz Khan is also a part of this film and will be seen in a cameo. She will also be seen in Love Hacker which is still in production. The actress will also be a part of Telugu film opposite Niithin.

Recently, the actress was in the news as she crooned a romantic song for the movie called Finals. She shared the news with fans on Instagram. The response from her fans was heartwarming.

I thank you all from the bottom of my heart for the wonderful response to my first attempt!Do watch the full video if you haven’t by clicking the link in my bio. @kailasmenon2000 @iamnareshiyer @prarun @niranj_maniyanpillaraju @rajishavijayan