Bollywood’s drama queen Rakhi Sawant has once again hit headlines and this time it is for her recent pictures. The Controversy Queen grabbed eyeballs as pictures of her posing with Pakistani Flag went viral on social media. In the pictures, she is seen dressed in a feather skirt with a thigh-high slit and halter neck low-cut blouse posing with the Pakistani flag.

Rakhi had captioned her pic as, “I love my India but it’s my character in the film 🎥 dhara 370”.

This picture left her fans quite upset.

Rakhi even shared a video where she revealed, “Hi friends, it’s a Pakistani setup. The film’s name is Dhara 370, which is based on Kashmiri pundits. I play the role of a Pakistani girl in the film. You can check out my costume. My character exposes the terrorist organizations that turn little children into jihadis.”

Im jast plying my character in the film 🎥

Currently, she’s shooting for her movie Dhara-370 in the Valley Of Gods, Kullu-Manali.

Rakhi is at present in Kullu-Manali shooting for an item number for her upcoming Bollywood film ‘Dhara-370’.
Check out some videos of her shoot there:

A Pakistani user Sambrina Khamisa slammed Rakhi and wrote, “From no where u define our culture ,pakistan follows islam which is so pure and peaceful religion which not allowed women to display her personal parts , proud to be pakistani n love my culture.” 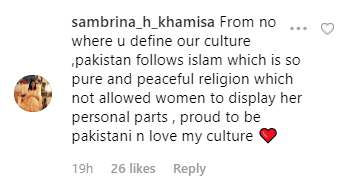 Responding to her, the actress wrote, “And this is film don’t eit my Bren iff u don’t like me get out from my Instagram.”

Also Read: Rakhi Sawant gets trolled after being compared to Sridevi by Deepak Kalal