Ranveer Singh Gets Trolled For THIS Outfit, Netizens Call Him Indian Lady Gaga

Ranveer Singh was once again trolled by netizens for his airport look, Netizens call him Indian Lady Gaga 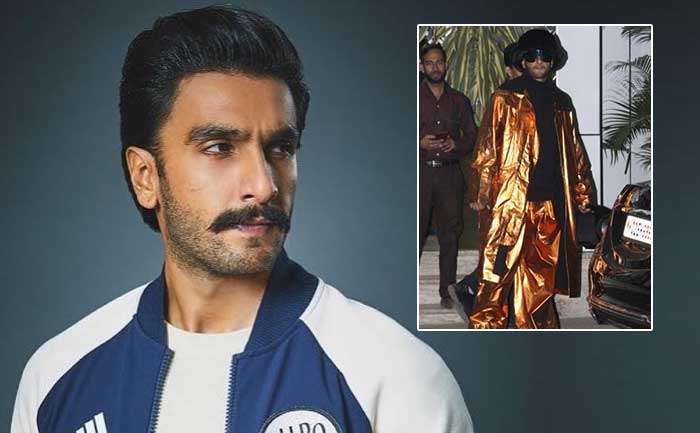 Ranveer Singh is one such actor in Bollywood who is known for making headlines for his wardrobe statements. While the actor is recognized for pulling off any outfit with grace, he is also known for committing fashion errors very often. This time the ‘Gully Boy’ actor was trolled for wearing a shiny golden jacket paired with matching trousers.

Recently, the actor returned to Mumbai after winning the ‘Best Actor Award’ at the Filmfare Awards 2020. In the pics, he was seen donning a black tee with a long metallic coloured coat with coordinating baggy pants. He pulled it up with shoes and a black furry cap and to complete the look, Singh was sported in black sunglasses too and carrying his own speakers. For his outfit, he was trolled left and right and centre by the netizens.

Take a look at the hilarious trolls below:

Meanwhile, at the Filmfare Awards 2020, Ranveer and Alia Bhatt starrer ‘Gully Boy’ broke all the records and became the first Bollywood movie to bag 13 awards in one go.

On the work front, Ranveer Singh will be seen next in Kabir Khan’s ‘83 and will be sharing the screen space with his wife, Deepika Padukone. The actor will be seen portraying the role of Kapil Dev. The film is being helmed by Kabir Khan and is slated to hit the screens on April 10, 2020.