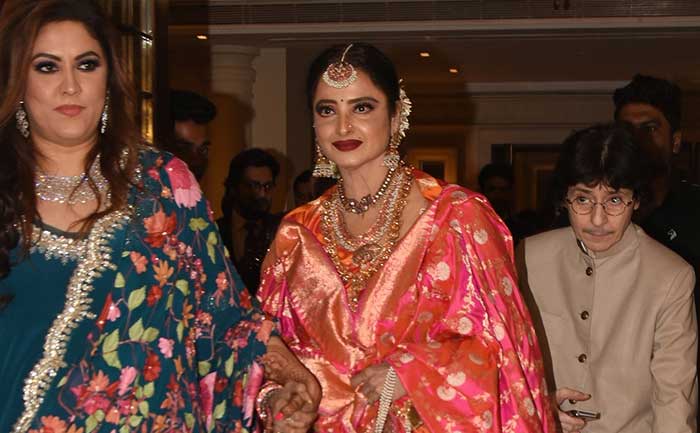 Veteran producer and celebrity manager Rikku Rakesh Nath’s daughter Shaina tied the knot in Mumbai on Monday and the grand ceremony was attended by Bollywood biggies like Madhuri Dixit, Rekha, Anil Kapoor, Boney Kapoor, Manoj Bajpayee, Rakesh Roshan, Jackie Shroff, and many other celebs.. But what grabbed our attention is Rekha’s lehenga.

Rekha attended Shaina’s reception party along with her sister Radha Usma Syed. Both the sisters looked beautiful in their traditional looks at the wedding reception. The fans just could not stop gushing over how stunning Rekha looked in her saree look and she never fails to win our hearts with her traditional attire.

Talking about her look, the Umrao Jaan actress Rekha is known to go over the top with her styling like no one else in the B-Town. She was seen wearing a dark shade of red lipstick along with heavy statement jewellery that was worn together, a maang-tikaa, heap of bangles worn up till the elbow, a gajra in the hair, sindoor and smokey eye makeup. The gorgeous actress Rekha looked ravishing as always.

Here’s the photo from Isha Ambani and Anand Piramal’s reception where Rekha wore the same Manish Malhotra saree and was seen with Shilpa Shetty, Gauri Khan and Sunita Kapoor.

The #posers… and what a colourful fun night it was @gaurikhan @kapoor.sunita and the one and only #Rekha ji Hearty congratulations to the #ambani and #piramal family , it was so beautifully done ?#ishaambaniwedding #celebrations #friends #love #wedding #memories #aboutlastnight #instagood