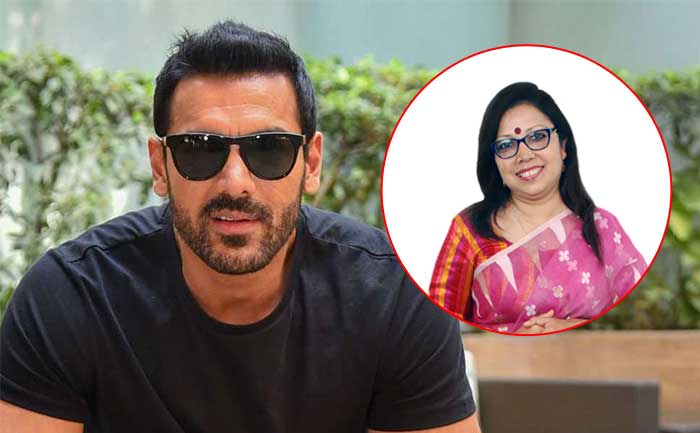 Bollywood actor John Abraham — who was last seen in Pagalpanti — is all set to co-produce a movie based on Revathi Roy, who started Asia’s first all-women taxi service called ‘ForShe’ (2007) and established ‘Hey Deedee’ (2016) a last-mile delivery service company with the vision to financially empower the underprivileged women.

The biopic of Revathi Roy, which is currently in the pre-production stage, will be helmed by Robbie Grewal. The story of the film has been adopted from Swati Lodha’s book titled “Who is Revathi Roy.”

“I’m very happy that we are producing this very upbeat story that combines the best of entrepreneurial twists with an extremely dramatic personal life. Revathi’s journey is that of a vivacious, funny, full of life, spirited woman who despite all odds has risen like a phoenix and has been continuously working towards empowering underprivileged women,” John said in a statement obtained by IANS.

Revathi told news agency IANS, “I’m very happy that John, Robbie and Anil have come together to tell a story which is not just my own but of every woman who was given a chance. Women are born fighters and an opportunity given to them never goes waste. All we need to provide is an ecosystem for them to flourish. In a small way, that is what my team and I have done.”

“Revathi’s life is full of crests and troughs and dramatic twists and turns. We usually see stories about how people rise from rags to riches; Revathi went from riches to rags to a revolution! It is an honour to be able to tell the story of such an heroic and courageous woman,” director and producer Grewal said.

Co-producer Bohra added: “Revathi has fought not just the harshest realities of life, but also the deeply patriarchal notion that awom en can’t drive’. Her business model itself defies this mindset by training thousands of marginalised women to drive, thereby setting them on a path of liberation and financial independence.”

Revathi Roy’s company has been garnering huge interest from investors and today some of its clients include Amazon, The Curry Brothers, The Bohri Kitchen, Subway, Herbivore, Shophop, Brijwasi, Pizza Hut, and Ecomm Express.