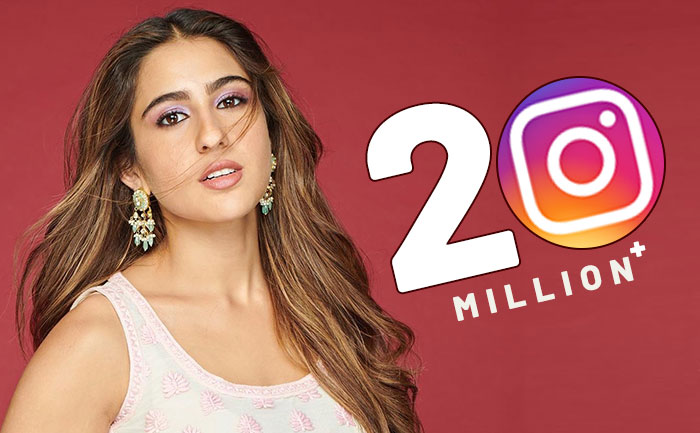 Sara Ali Khan has made ripples across the Indian film Industry right from the day her debut film was dropped in this ocean of cinema. Sara Ali Khan, who is known for her admirable acting skills, is also well-known in the Indian film industry for her colossal fan-following, audience and presence on social media. The actress surely knows how to keep the audience engaged with snippets of her work and looks on social media.

Sara Ali Khan always has an unparalleled buzz around her from the time the actress has joined Instagram.  Recently, the actress crossed a jaw-dropping 20 Million followers on Instagram owing to the wide fanbase where she serves as the right inspiration and a youth icon to all.

What makes this grand is that Sara Ali Khan is the first in her generation in the Indian film industry to cross a massive 20 million following in a span of 18 months. Today, with 20.1 million followers, the actress has crossed a milestone that many in the industry haven’t crossed even after years of being around.

On the work front, Sara Ali Khan was last seen in Imtiaz Ali’s ‘Love Aaj Kal’ opposite Kartik Aaryan.  The actress will next be seen in Aanand L. Rai’s ‘Atrangi Re’ alongside superstars Dhanush and Akshay Kumar. She has also finished shooting for David Dhawan’s ‘Coolie No. 1’ in which she is paired with Bollywood heartthrob Varun Dhawan.

Also Read: When Sara Ali Khan was ‘almost suspended’ from school for THIS reason