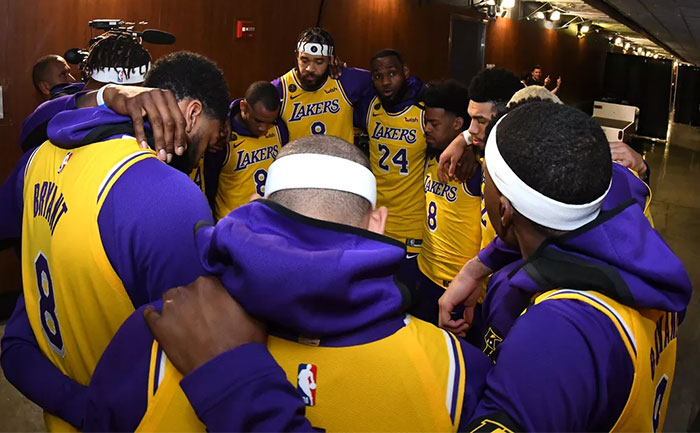 Two members of the Los Angeles Lakers have tested positive for the new coronavirus. This comes on the heels of four Brooklyn Nets players testing positive for the virus, including superstar Kevin Durant. The Lakers played the Nets on March 10 at Staples Center.

The Lakers said they tested their players because on March 10 they played the Brooklyn Nets, who had four players previously test positive for the virus. The players are under isolation and being cared for by team doctors who are closely monitoring the two players.

As per the statement released by the team, “Following four Brooklyn Nets players testing positive for Covid-19, because Los Angeles Lakers’ players were exposed to them during our game against the Nets on March 10, our team physicians and public health officials recommended coronavirus testing for the players. We learned today that two Lakers players have tested positive. Neither of the players showed symptoms. They are advised to stay in self-quarantine.”

We learned today that two Lakers players have tested positive for COVID-19. Both players are currently asymptomatic, in quarantine and under the care of the team’s physician.https://t.co/RmqjnRzGLk

The statement further added, “All players and members of the Lakers staff are being asked to continue to observe self-quarantine and shelter at home guidelines, closely monitor their health, consult with their personal physicians and maintain constant communication with the team.”

The Lakers did not identify the two infected players.

A number of NBA players have tested positive for COVID-19 since Utah’s Rudy Gobert was confirmed to have contracted the disease last week including two-time champion Kevin Durant. This has prompted the league to impose an indefinite suspension on play.