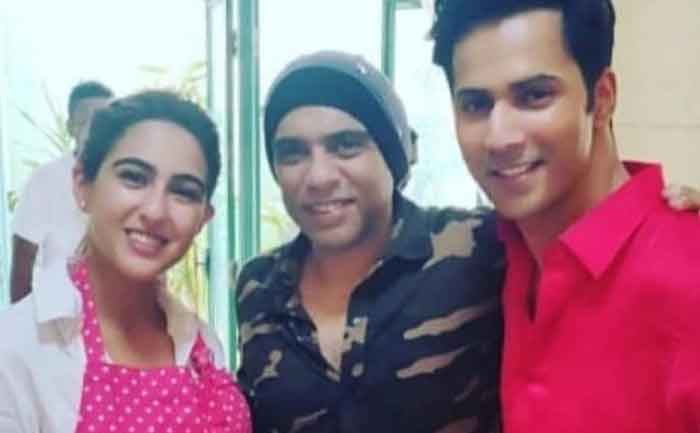 The modern adaptation of Coolie No 1 has been in the news ever since it was announced. Yes, the film has finally gone on floors in Bangkok and both Varun Dhawan and Sara Ali Khan seem to be enjoying shooting the film. Days after flaunting their Coolie No 1 jacket, yet another picture of Sara Ali Khan and Varun Dhawan has made its way on social media.

In the photo, both Varun and Sara can be seen striking a pose with the screenwriter on the sets. Varun is dressed in a bright bright red shirt with black pants while Sara can be seen sporting a white kurta with a red checkered apron. Both the stars are seen looking extremely adorable while posing with, Farhad Samji.

Earlier there were several photos showing clapboard shot or mahurat shot were shared by David Dhawan, who is directing the film. The most important thing about those photos was, both Varun and Sara are nowhere to be seen in those particular photos.

Do not take life too seriously. You will never get out of it alive-Elbert Hubbart. N joy karo bhai leaving for coolie no1 Video- @aalimhakim Edited- @sumit.baruah

The remake will be extensively shot in Bangkok and is helmed by David Dhawan. It is slated to release on May 1, 2020.