Home > Entertainment > Bollywood > Vidya Balan To Play Sridevi In Her Biopic? Here’s How She Reacted

Vidya Balan To Play Sridevi In Her Biopic? Here’s How She Reacted

Vidya Balan Is Ready To Star in Sridevi Biopic: Will Need a Lot of Guts, But I'll Do it as a Tribute 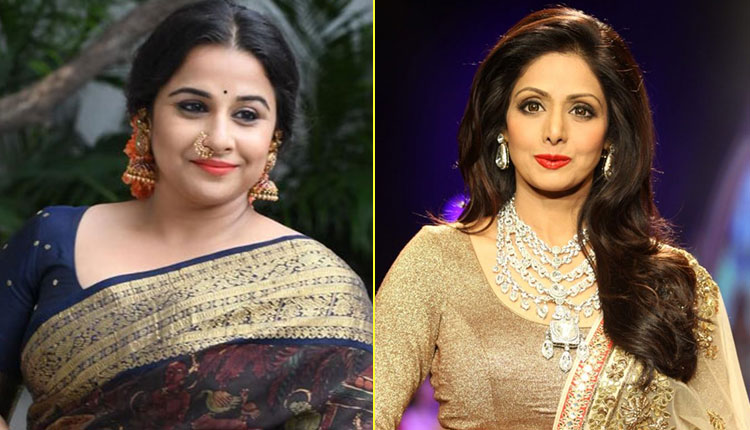 The versatile Bollywood actor Vidya Balan recently appeared at the show ‘Starry Night 2. Oh!’ along with her sister Priya. When the host of the show Komal Nahta asked if she would play the role of legendary actress Sridevi on the silver screen if her biopic were to be made, Vidya said it would require a lot of gut to play her role but she would do it as a tribute.

Notably, Vidya Balan had already paid a tribute to late Sridevi in one of her Hindi film ‘Tumhari Sulu’, dancing to the iconic song of her. When Sridevi was passed away last year in February, Vidya took to Twitter and wrote, “My inspiration is no more.”

Talking about ‘Judaai’ actress, Vidya had earlier said,  “I am an ardent fan of Sridevi, I was nervous (while doing the film). But having said that we are recreating the song Hawa Hawai from Mr India. It is a tribute to her, we are having fun. There is only one Sridevi.”

At Komal Nahta’s show, when she was asked about selecting bold roles. She said, “I was brought up with a feeling that I was the most important person in my life, and I think that’s what makes all the difference. When I was offered Ishqiya, I felt that there were very few scripts which had such a juicy role for a woman and when I read it, I absolutely loved it.”

Also Read: Karisma Kapoor Shares Unseen Picture Of Sridevi, It Will Make You Miss Her