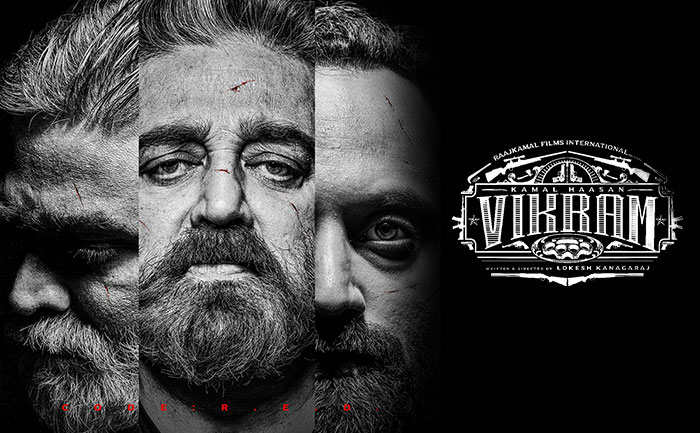 South superstar Kamal Haasan dropped the first look poster of his upcoming action-thriller Vikram. The poster is a collage. It features on-screen characters of Kamal Haasan, Fahadh Faasil and Vijay Sethupathi. The versatile actors are sporting an intense intriguing look in the viral poster.

Sharing the poster on Twitter, Kamal Haasan wrote: “Only valour should wear the crown. I dare again to render before you the best of our talents. Like before, grant us victory!!Vikram. #Arambichitom.”

“Only valour should wear the crown “
I dare again to render before you the best of our talents.
Like before, grant us victory!!
Vikram ….விக்ரம்#Arambichitom @RKFI@Dir_Lokesh @VijaySethuOffl #FahadFaasil @anirudhofficial pic.twitter.com/SqEmjcnInS

The poster is made more dramatic with the cuts on their faces. Though it is monochrome, cuts on Kamal Haasan, Fahadh Faasil and Vijay Sethupathi’s faces are red in colour. .”

The first look poster of Vikram created a stir on social media with fans reacting to it. Many fans of Kamal Haasan commented on his post and expressed their excitement for the upcoming film.

Vikram is being directed by Lokesh Kanagaraj and it will feature Kamal Haasan, Vijay Sethupathi and Fahadh Faasil in the central roles. The film reportedly also stars Antony Varghese, Narain, and Arjun Das. It is being produced by Haasan’s Raaj Kamal Films International.

Kamal Haasan is currently awaiting the release of Indian 2, which has been directed by S Shankar. The movie also features Siddharth, Kajal Aggarwal and Rakul Preet Singh in pivotal roles.