Vivek Oberoi seems to have landed himself into trouble by sharing disrespectful meme featuring Aishwarya Rai Bachchan and Salman Khan on Twitter. The Bollywood actor, who is portraying Indian Prime Minister Narendra Modi’s role in his biopic, refused to apologise despite having received backlash on social media.

Vivek Oberoi has finally deleted the Tweet and wrote on Twitter: “Even if one woman is offended by my reply to the meme, it calls for remedial action. Apologies🙏🏻 tweet deleted.”

Defending himself, Vivek told news agency ANI, “Those who are in the meme have no objection, while politicians are trying to politicise the issue. They don’t work on issues but start their politics on non-issues. There is a ‘Didi’ in West Bengal who puts people behind jail for a meme. Now, these people are demanding to put Vivek Oberoi behind bars.”

There are only a few people on social media who defended Vivek on Twitter. And one of them was Bollywood actress Kangana Ranaut’s sister, Rangoli. She seems to be angry on Twitter and called #MeTooIndia and National Commission for Women (NCW) fraud.

In her Twitter post, Rangoli wrote, “I will never forget how they refused to take Kangana’s complaint against a big star, but come to fight for these childish jokes when so many rape and harassment cases are lying unaddressed #Shame.”

She was actually referring to Vivek Oberoi’s exit poll meme and said the Commission for Women has time for all this but not when her sister Kangana needed them the most.

Here, check out her series of tweets below…

I will never forget how they refused to take Kangana’s complaint against a big star, but come to fight for these childish jokes when so many rape and harassment cases are lying unaddressed #Shame

Coming back to Vivek Oberoi, he happened to repost a meme that featured Aishwarya and Salman as an ‘opinion poll’, Vivek and Aishwarya as the ‘exit poll’ and Abhishek, Aishwarya, Aaradhya as the final result. Check out Vivek’s tweet below: 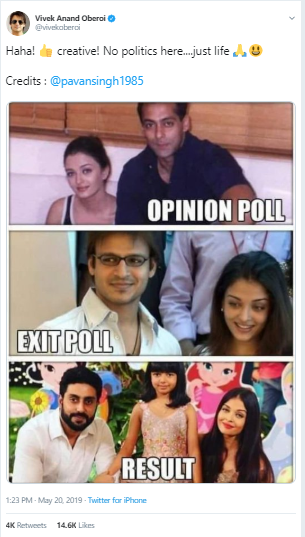 Vivek’s post did not go down well with several Bollywood stars and senior journalist and even his own fans. However, Bollywood celebs such as Sonam Kapoor, Urmila Matondkar, Madhur Bhandarkar slammed Vivek for stooping so low.

On the professional front, Vivek Oberoi is currently gearing up for the release of PM Narendra Modi biopic, which is all set to release on May 24.